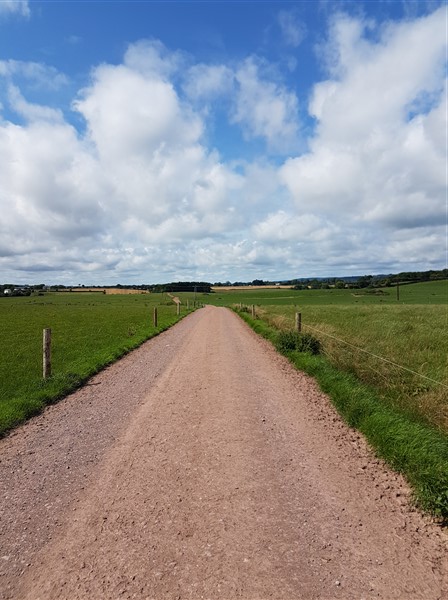 I’ve had a cold for over a fortnight now and I’m getting rather fed up with it at this stage.  It’s one of those horrible ones, that mutates almost daily and lingers forever.

First I felt dog rough, then came a cough, good enough to rival a smoker of fifty a day and now there’s the part where you get up feeling refreshed but come 4pm you’re flagging so badly that all you want to do is go to bed.  That’s neither practical or something I really want to do, but my ability to focus on the tasks at hand isn’t going too well in the meantime.

I’ve been walking despite feeling under the weather, maybe not as much as I do normally, but the dogs have still had at least one walk a day.  It’s amazing how Autumnal it feels out there already.  The Elder bushes and trees around my house are fairly laden with berries as are the Blackberry Bushes and I’m looking forward to seeing if the Oak Trees near me have Acorns this year.  (There’s a project I’ve been desperate to try)  I took the photo above this morning and it was deceptively warm on the farm, despite the breeze, so I’m determined to make the most of my dog walks without having to wear all the Winter layers, while I can.

Some of you might have seen the latest episode of the Olann and Podcast that Deirdre and I managed to record earlier in the week?  In it, I gave a good run down of my experience at the 2nd Yarnfolk Festival of Wool in Whitehead, Northern Ireland.  I won’t prattle on about it again here, except to say that if you’re thinking of visiting Northern Ireland in 2019, it would be worth trying to do so whilst the Festival is on.

The festival took place on Saturday August 4th and was fantastic.  I was already feeling rough then, but I did my very best to enjoy myself whilst I was there.  I’m hoping that after having a cold this year and driving the 800km round trip in one day last year, that it’ll be third time lucky and Yarnfolk 2019 will be the year I get to fully immerse myself in the festivities.

That said, I managed to hold it together long enough to say hi to everyone squidge yarn and fibre and even make a few purchases.

My first acquisitions and the one I had planned to pick up, was some lovely fibre (and yarn) from Helen aka Pretty Funky Fibre.  The Rolags are a blend of Merino, Alpaca, Mulberry Silk, Sari Silk and Nylon Sparkle in the colourway ‘Rainbow Brite’.  The braid of fibre is a BFL & Silk blend, that’s an unnamed Yarnfolk Special Colourway.  Similarly, the yarn mini is a 75% SW Merino, 20% Nylon, 5% Super Lurex, Festival Special, called ‘Lesser Spotted Yarnfolkers’.

Next up was a visit to Softash Wood Crafts, to pick up Yarn Butlers for some of my friends, who were so impressed with the one I purchased last year, that they asked if I’d get them one.  Whilst my hubby was chatting with woodturning genius Gordon, I spotted the little needle holder laying down in this photo.  At about the same time Con, the aforementioned hubby spotted the lighthouse one, so I have two, one for my notions pouch and one for my craft room.  How bad?

These few bits, were my ‘just because’ purchases from Lighthouse Yarns.  Yarn for sock cuffs, heels and toes, that fabulous ceramic button that I’ve no idea what to use it for and the rainbow polymer clay buttons because at 5 for £1, they were too much of a bargain to leave behind.

The Lighthouse Yarns purchases were almost my last of the day (I’d bought the Irish Ram Brooch above earlier), but just as we were heading to the car to go back to Belfast, I remembered how annoyed at myself I get, when I forget to buy at least one proper hank of festival yarn.  So I ran back to pick up this lovely Yarnfolk colourway Merrow, from Giddy Aunt Yarns.  It’s on their Merino Singles base and as I don’t usually do Singles, I’ve nothing to pair it up with, in my stash.

Oh dear, looks like I’ll have to pick up another to knit a shawl.  (the hardship 😉)

In more exciting news, well for me anyway.  IT’S A BOY!

My first grandbaby is going to be a boy, well that is unless there was a mistake?

I can’t explain the wave of relief that washed over me when Dina told us that the anatomy scan gave him the all clear.  Well, I can, but I’ll talk about it in my next post when I’m going to show you some of the patterns I’ve been looking at to knit for him.

In the meantime, those samples for the next issue of Olann and aren’t going to knit themselves, are they?