No surprises there then?

I have become completely obsessed with searching for baby knits on Ravelry, since learning that my first grandchild will be a boy.  I’m sure this level of preoccupation is beyond healthy and let’s face it there are only so many hours in the day right?

Hands up, since my daughter first told me she was expecting, I’ve been a little ‘reserved’ about the whole grandchild thing, which shocked me if I’m honest.  Anyone that knows me personally will tell you how much I’ve wanted to be a grandmother.  Daft I know, especially given my kids ages and mine come to think of it, but it’s the truth.

My initial reaction was one of complete and total utter joy, I was fit to burst knowing what I knew.  Then, within the space of a few hours, my joy mutated into total anxiety and it felt like a thick mist had formed between me and my joy.

Does that even make sense?

I was happy, obviously, but I’m not sure I’ve been that worried for quite a while.

It is a totally different feeling when your baby is expecting their baby to what you feel about impending motherhood when it’s you.  I’m assuming it’s something normal, a shared experience that most mums and dads, go through when they’re going to become grandparents?

I’m not gonna lie, I was getting a little concerned that it was going to spoil everything for me and that I was never going to feel real excitement about becoming a grandparent until the baby gets here.  That totally changed when Dina had the anatomy scan and more so since learning he’s gonna be a little boy.  Boy or girl, I really couldn’t care less, it doesn’t matter and I’d be lying if I said I wasn’t still worried.  I am, more so than I ever imagined I could be, but it feels like the mist has thinned, just enough for me to get excited and boy am I.

I want to knit, sew and build all the baby things – I am officially obsessed.

Having spent hours on Ravelry, I have managed to narrow my first preferred projects down to just a few. 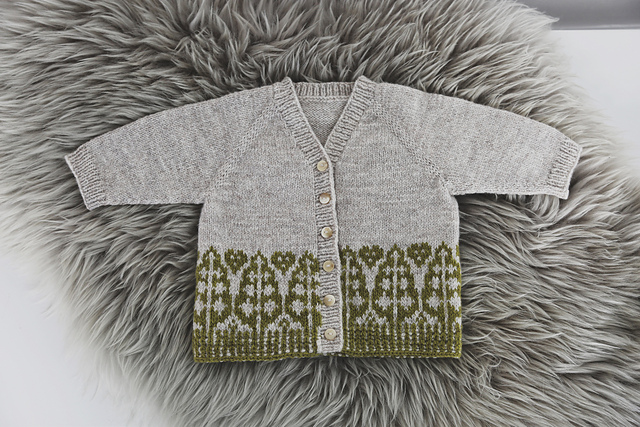 If you saw the latest episode of the Olann and Podcast, you’ll already know how much I love this little design?  It’s called Conifer and it’s designed by Ella Anderson.  In a move away from my usual knitting preference, I had totally fallen in love with the colourways used in Ella’s sample and immediately jumped onto the Blacker Yarns website to order the Swan Falkland Islands 4-ply.  Unfortunately, it’s completely out of stock – EVERYWHERE!  I know because I’ve looked at all of their European stockist’s websites.  I’ve something else in mind now though and will share it with you when it arrives.

Undeterred, I’ve been looking for other designs to knit and as you’d expect I’ve happened upon quite a few.

It goes without saying that the Beyond Puerperium, Baby Vertebrae, Aviatrix Hat and Baby Hug Boots are all on the list, but so are Lilla Sundsjön by Erika Guselius (the green one) and Gilipeysa by Hélène Magnússon 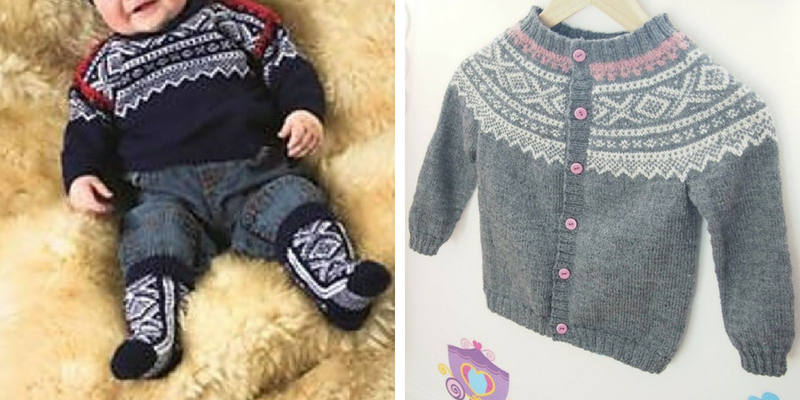 I might also have become slightly smitten with the Stjernebukse Starrypants
by Tina Hauglund and the Saffran Cardigan by Nicolina Lindsten.  Although quite a few people have said the pants almost broke them.  He’s gonna be a Winter baby though and that cardi, well?

There’s a bit of a theme here isn’t there? 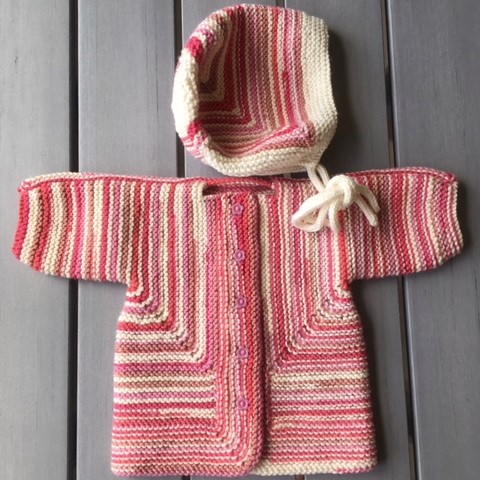 However, throwing the stranded colourwork theme completely out of the window, there has to be at least one Baby Surprise Jacket by Elizabeth Zimmermann and matching Bonnet.  This beautiful set has been knitted by my good friend Margaret, isn’t it lovely?  It’s her ‘go to’ baby knit, as you’ll see if you pop over to the interview with her on the Handweavers Guild of Cork Blog here.

None of these projects has become a wip as of yet, because the sample knitting for the next issue of Olann and is still underway.  Hopefully, I’ll get to cast at least one of them on sometime over the weekend, just to stop me looking at Ravelry for a while if nothing else.

The little booties at the top of this post were a gift for good friend and Olann and Co-Editor, Deirdre’s newly born nephew.  They’re the previously mentioned Baby Hug Boots, but I’m looking forward to giving the Baby Hausschuhe by Ines M, a try after being told about them by a friend on Ravelry.  They’re very similar to the Baby Hug Boots, except there are no seams to sew up – bonus!

Don’t even get me started on the sewing patterns, upcycling and fabric printing ideas floating around in my head.

4 thoughts on “I Want to Knit All the Baby Things”