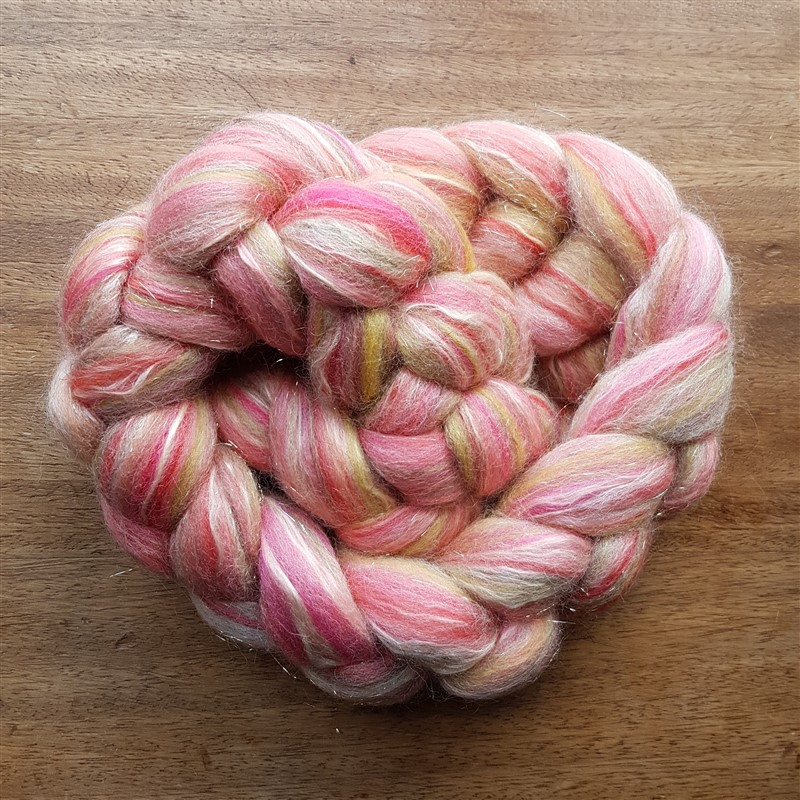 With the majority of my knitting time being spent on getting some of the samples for the next issue of Olann and ready, it feels like I’ve very little of my own projects done.

Maybe that’s why I’ve felt drawn to trying to get a little spinning done of late?

On the face of it spinning up this lovely braid of fibre from Hilltop Cloud, shouldn’t be a problem.  I’ve two wheels and therefore the only decision should be, which one to use?  Wheel picked (Kromski Fantasia, because my feet are really playing up at the moment and the double treadle might be the way to go), I sat down ready to begin and only then realised that all of my bobbins were full.

Better late than never I suppose?  Once it’s had a little wash and set, I’ll work out how many metres I have and see if there’s anything I fancy making.

There was a little extra yarn left on one of my bobbins, not too much, so my consistency must be pretty good.  Anyway, rather than Navajo plying it up, I’ve decided to leave it as a single and will keep this and any future little bundles to one side for weaving. 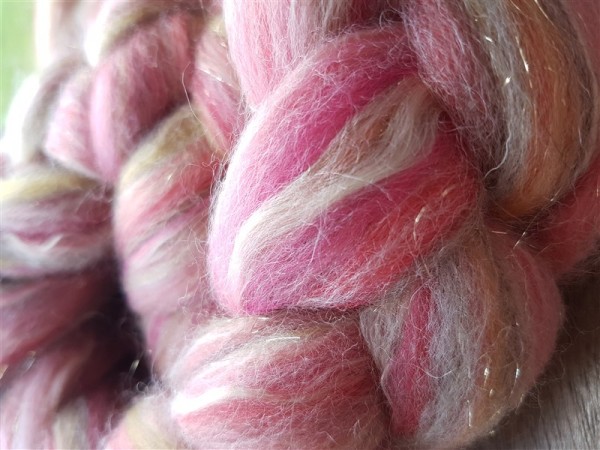 This bundle of heavenly pink joy has been one of the exhibits in my Yarn Musem for well over a year or so now.  It’s one from the range of Ceilidh fibre blends from Hilltop Cloud which celebrates the changing seasons, the ever-changing landscape, and the landmarks in our calendar.  This colourway is called Beltane, traditionally the start of Summer and is made up of 25% BFL, 12.5% Soya Silk, 12.5% Shetland, 5% Angelina and 45% Merino.  It’s spinning up rather lovely, although I’ve become frustrated with my efforts to spin ‘across the top’ and have reverted to my normal spinning style, which still gets the job done and results in a much more even yarn.  Hopefully, this one won’t stay on my wheel for best part of seven months. 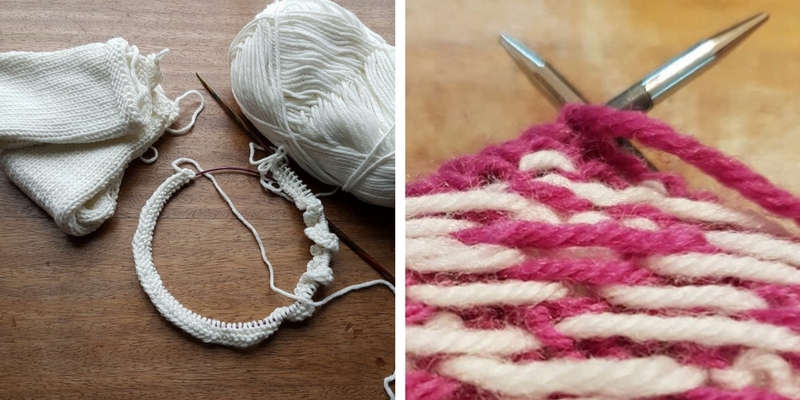 I’ve teased a couple of the samples I’ve been making for the Spring Awakenings issue of Olann and, over on Instagram.  Just in case you’ve missed them, there’s something by way of a baby knit and that’s definitely some mighty fine stranded knitting there. (modest I know)

There have also been two more washcloths for the #yarnhoarderdishclothchallenge.  Both have been made using Rico Essentials Cotton Aran, so I’m steadily getting through my stash.  I’d run out of the salmon pink yarn I was using on the right but found a mini ball of it in a different dyelot.  The stripe of the speckled colourway is my attempt to disguise the slight difference in shades.

There has, of course, been daily knitting of my diary and I’ve made a change to the way I’m making the strips, more about that in my next post.  For now, I’ve just realised I’m rather hungry and I’m really trying to convince myself to go out and walk my dogs again.

It’s far too cold out there and I have to wear so many clothes to keep warm, that I can barely move.