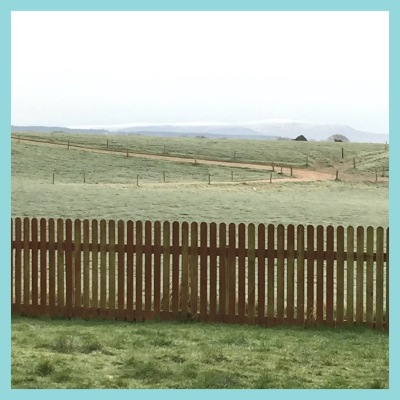 The Winter edition of Knitty was published in December and I’ve only just managed to spend some time reading through it now?  I say reading through it but that doesn’t seem the right turn of phrase, maybe it should be ‘clicking’ through it?  Anyway, as I settle down in front of my computer enrobed in as many woolly layers as possible – there’s a window in front of my desk, a big drafty one, but the view  (above) is beautiful.

I love the individuality of Knitty, which isn’t as reliant on the ‘big boys’ within the industry purchasing advertising and promoting their own agenda because it’s online, rather than in print.  Not that I’m against knitting magazines, far from it, a quick glance into my office would confirm that, it’s just that Knitty appeals to the more creative, experimental side of me I guess.

As usual it all makes for a good read and being the 50th issue it’s jammed packed with articles, reviews and patterns.

In Cool Stuffs there are reviews for several of the most recently published knitting books and the good people of Knitty also have a look at the Double Pointed Knitting Needle Sorter and Gauge and the Eszee Twist Tool for Spinners.

Donna Druchunas Ethnic Knitting Adventures article on Fighting Prejudice in Knitting and in Life makes for an interesting read.  I shan’t go into more detail here in order to encourage you to take 5 minutes to have a read yourselves.  The piece works as a great introduction to The Slouchy Saami Hat designed by Donna’s friend Susan Santos which she created after a visit to the Nordiska museet — the Nordic Museum in Stockholm. 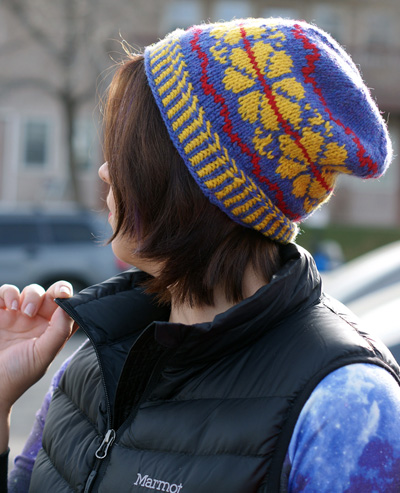 Susan took her inspiration from the exhibitions of Swedish folk art and fashion from the Saami (or Sami), the Arctic indigenous people of northern Sweden, Norway, Finland, and Russia.  The traditional folk costumes of the Saami are often adorned with bright bands of weaving in geometric and floral designs,  if you’re interested in knowing more, pop over to Roman K’s fantastic blog dedicated to folk costumes. 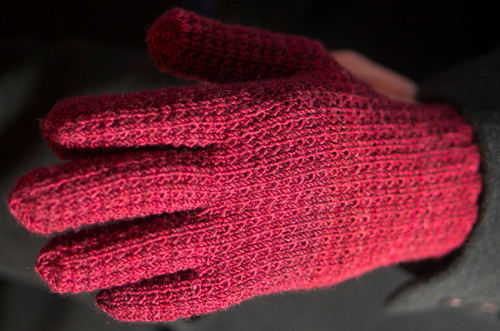 Franklin Habit’s Stitches in Time column has a pair of vintage gloves for us in the 50th issue.  Franklin has adapted the pattern from Weldon’s Practical Knitter, oh how I’d love even one of them.  Knitted in 4ply yarn the gloves are sized to fit a man, however Franklin explains that simply shortening the fingers should make them a better fit for women as the ‘hand’ part of the glove is quite elastic.

Amongst my favourites in the pattern section are

Alice by Juliett Turjoman – a very unusual hat, knitted in aran weight yarn the hat is made in 3 seperate pieces. Juliett was took inspiration from Parisian designer Alice Bernard who was a successful couturière and hat designer during the Roaring Twenties

Lean On Me by Anna Maltz – a dazzling, slim fit tank top which I adore.  It’s worked in double knit and has steeks, but could prove so tempting that it has to be knitted :-0

Smithfield Pullover by Amy Christoffes – a cosy, oversized, top down, aran weight jumper.  No endorsment is needed as it obviously sells itself.  My only problem would be making sure it didn’t wander off with ♥ Dina ♥

I also love Minetta by Kirsten Kapur but as beautiful as it is, there’s no getting away from the fact that it’s knitted in 4ply (sob), one day…..

Last but not least in Knittyspin there are a couple of interesting articles well worth a look at including one on jar dyeing by Laurie Osbourne.