About this time last week, my husband and I were driving on the motorway not too far from our final destination of Ardrahan and the Opening Day of a new venture – Irish Fibre Crafters.

Unlike our usual February weather, the sun was high in the sky and whilst there was still a nip in the air it felt almost Spring-like.

Ardrahan is a small village in County Galway, which on first glance might not seem to have that much going on.  Look a little closer and you’ll discover a bustling Farmers Market on a Saturday and a bus service that goes to both Cork and Galway.  It’s just off the motorway and if that wasn’t enough, Ardrahan also has a train service.  Now I know that this mightn’t sound like much, but in a country where public transport is often overlooked, it’s HUGE.

In fact, the great transport links were high on the list of factors that led to Ardrahan being chosen as a location for Irish Fibre Crafters.

So what exactly is Irish Fibre Crafters?

The brainchild of Sandra King, it’s essentially the working studio of Sandra and two of her fibre crafting friends, Susan and Megan.  The trio have a shared passion for all things fibre, particularly Irish fibre and traditional Irish crafts and they believe both should be championed both here and abroad.  Something very close to my heart and one of the main reasons behind Olann and.

The studio itself is a lovely large premises once used for retail, that is dominated by three large floor looms.  On the shop floor, spinning wheels and other equipment used for teaching sit comfortably next to the items that are for sale. 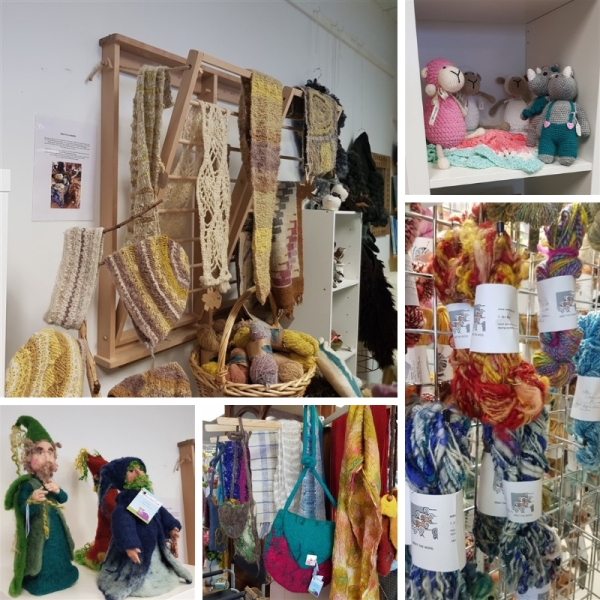 In a bid not to have too many items that are the same, the range of items to purchase is quite varied and includes handspun art yarns and handmade lovelies to wear, play with or decorate your home. 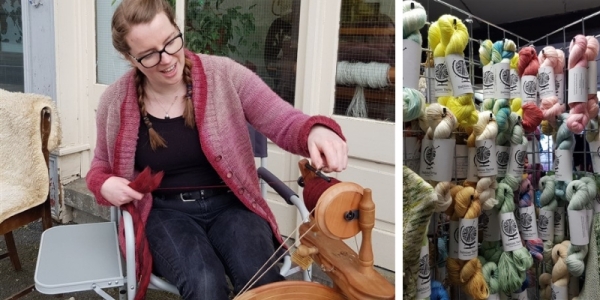 Like us, fibrecraft enthusiasts travelled from all over Ireland to Ardrahnan for the opening and I was thrilled to bump into several people I know.  The lovely Grace from Babbles Yarns was busy spinning up some lovely fibre outside the entrance to the studio and her hand-dyed yarns were also for sale in the shop.

Many of the items stocked will eventually be available to purchase via the Irish Fibre Crafters website, which is where you can also find details of the workshops, courses and Summer Camps available.

I was a little naughty and left with a small purchase myself.

Well, I mean, it’s a fair way to go and not have anything to show for it isn’t it.  The day was lovely and I enjoyed spending some quality time with my husband, but…..

In truth, despite blue being my absolute favourite colour, I tend to avoid buying blue fibre and only realised this when I went to spin some yarn up to knit Arthur something.  (fantastic excuse don’t you think?)

The weather today, by stark comparison to last week, is windy, wet and grey (as depicted in the obligatory farm shot at the top of this post).  It’s meant to get wilder out there too as Storm Freya is on her way and with her comes the distinct possibility that my flight to the UK will be cancelled. 🙁

I’m keeping my fingers, toes and anything else I can think of crossed that my flight to Gatwick will somehow slip past the slightly upset lady and land safely, so I can make my way to Hove.  It’s been the best part of a month since I last saw my daughter and her family and Arthur has already changed so much.  He’s gaining weight and growing like a champ – thanks in no small way to his almost constant feeds (Go, Dina!).  He’s also smiling and chattering away, so I’m looking forward to being able to put the world to rights together.  Truth be told, there’s probably much more chance of Arthur being able to fix some of the current issues, than half of the people in power.

I’ve only got two projects with me this time because Time spent grandson cuddling is too important.  Both are for the little man and one isn’t even on the needles yet.  Having promised myself that I would cast on the Bitty Cache, I perused the more overlooked exhibits in the yarn museum and discovered this luscious skein of yarn  💖

It’s a lovely intuitive little knit that takes little or no concentration.  The purl detail on the raglan decreases is my favourite part so far – simple is so often best.

I’m off to meet my friends now for a catch-up and a spot of knitting and I hope you enjoy whatever you’ve got planned for your weekend too.

Except today is actually the 7th of March, not the 2nd when I wrote this post.  In my haste to go out and see my friends, I forgot to publish this and was then too busy running around and packing for my trip to the UK to notice until now 🙈