That must be the longest amount time I’ve ever gone without blogging – seven weeks to be precise.

It was a little bit of self-imposed hiding in truth.  A couple of days after my last post we had to say goodbye to my daughter’s dog Puppy (on the left), which was incredibly difficult.  Her real name was Dope and bless her she really was.  She was far from the most sensible of animals, particularly when it came to vehicles.  She’d been in two accidents the first resulted in a big operation and pins in one of her hips and one of her legs.  The second meant she had to have one of her back legs amputated.  Despite all of this she was a very happy dog, always smiling and incredibly loyal, always circling back to me to make sure I was ok when we were out walking and very protective if a stranger came near.

Saying goodbye was a very tough decision, but having had dogs for most of my life, I understand it’s part of it.  The joy they bring far outweighs the bad and it’s true to say that mine have been my salvation, sanity and companions.  So it was horrendous when we had to say another goodbye two weeks later, this time it was to our big, old, Labrador, Rizla.  She was puppy’s mum and had been poorly for a little while and went downhill almost immediately after.

My local vets were incredible and they were very patient with us through the whole journey.  They really did make everything so much easier and now my girls, all three of them, are resting in one of their favourite sunny spots in the garden.  (very deep down obviously).

Now I only have the boys, Errol and Thom, although if you hear me calling them you might wonder if they really are boys.  I find they sometimes only really respond when I shout out ‘girlies’ like I always have  😂

The death of the dogs meant I really wasn’t able to focus on much for a while and as a result, the work started to pile up, particularly the stuff for the Harvest Moon Issue of Olann and.  So much so, that when I did feel able to tackle the ever-growing pile of items, I was so behind, that it feels like I’ve been tied to my computer for about a month.

It’s a very rare day when I won’t knit a stitch, but there have definitely been some and on others, it was all I could do to complete that day’s Knitted Diary.  Food, because I was working such odd hours, for the most part, consisted of a sandwich and a chocolate bar, with the odd hot meal thrown in.  However, despite the total lack of routine, I did manage to keep on exercising and walking the boys – score! 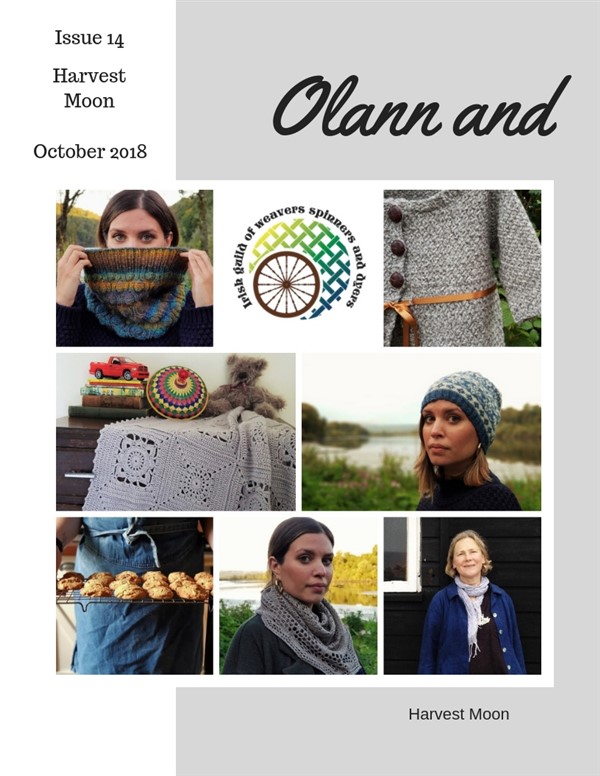 Now that the Harvest Moon Issue is published, it was completely worth it.  I am thrilled with how everything came together and I’m so grateful to my friends, two of whom, Goosey Lucy and Catherina, made samples for the photographs and Helen, aka @prettyfunkyknitter, who wrote the article about the Irish Guild of Weavers, Spinners and Dyers.

There’s no rest for the wicked though because we were behind getting this issue out it means we have to start working on the next issue immediately and October is tax return month too 😱  I’ve also promised myself that I’m going to stick to a plan of blogging and podcasting for Olann and, after that, I’m going to do my best to pop in here and continue to document my making.

I’ve loads of makes to catch up on from the last issue, Sunny Summer Days, there’s the Carnival Hat,  the Modulation Mitts and the Baby Boatneck Sweater that I’d like to shine a little spotlight on.  There’s also a design I created for Yarn Vibes to talk about and then there are the Melange Cowl, Dream Cardi and Subalpine Hat that I made for the Harvest Moon Issue.

In amongst all of that, there have been baby knits, both finished and ongoing and I even managed to do a little Pin Weaving after starting it at the September meeting of the Handweavers Guild of Cork.  (there’s more than what’s in the photo, not much more, but still.)

Last but not least, I sat down this weekend and did some work on the Conifer Cardigan I’m making for my grandson due in the New Year, but I’ll give you all the details next time.

In the meantime, it’s a quick cuppa and back to the accounts for me.

5 thoughts on “Getting Back to Normal”