So what does a group of knitterly friends make when one of us is having a baby or grandbaby?  (yes a few of us are closer to that now)

Traditionally we’ve made blankets because that’s a fairly easy group project.  The first one was made of individual squares, which we all made and I sewed together.  Except that’s not as easy as you might think – perhaps I should bring you back to the Charity blankets we made for Armenia when I had the shop? 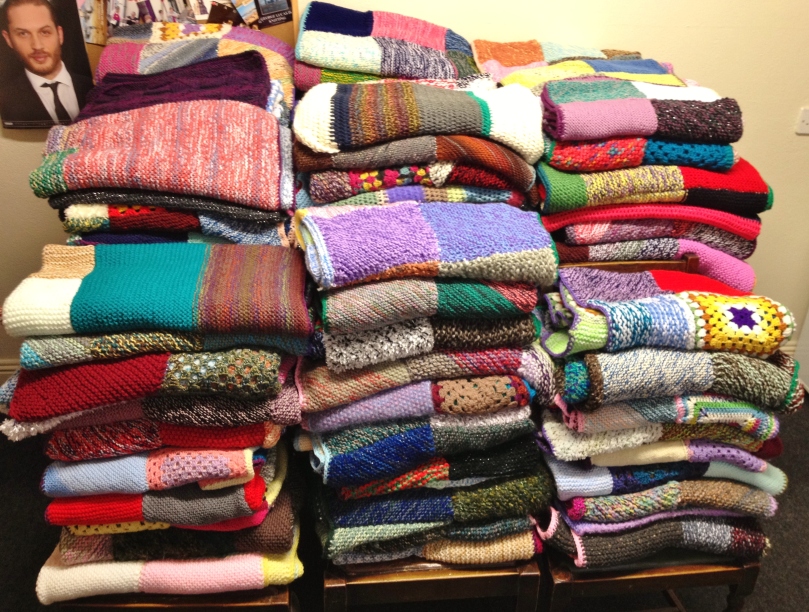 Just because you ask for 8″ squares, it doesn’t mean that’s what you’re going to get.  Whilst the blankets were a massive achievement, I know what the answer would be if I ever asked my friends to help with sewing up charity blankets again.  (Oo-er, found myself getting slightly side-tracked by the Tom Hardy calender there for a minute, it was very much appreciated by many a knitter that sat in that kitchen.)

Totally off topic there, sorry.

Oh, yes, blankets!  Anyway as I was saying, squares made by different people are not without there problems, even those made by one person can turn out slightly different in size.  So we moved onto making blankets using Rico PomPom, which is absolutely perfect for a group of knitters to use.  Regardless of the different tensions, you always knit two stitches between each pompom and when it’s washed any slight differences in gauge just disappear.

Except, it’s not because the shades available now have all gone a bit pastel and whilst there’s nothing wrong with them, they’re probably not the best representation of our group.  In truth, we were also led to believe that our friend, the mum to be, was going to be making a blanket.  Several of us were even with her when she bought the yarn – not that we’re judging you understand, none of us is in the position to do so, believe me 😬

So when I threw the question open to the group, Orela suggested a mobile and we all agreed that knitted birds would be the way to go.  The cogs were turning on the way home from knitting group and after spending some time searching through Ravelry, I sent a few suggestions to everybody and we decided to go with mini Owl Puffs.

If you’ve never before knitted an Owl Puff, where have you been?  It’s a lovely little pattern designed by Jenna Krupar, free to download, it’s suitable for any yarn as long as you adjust your needle size to suit. 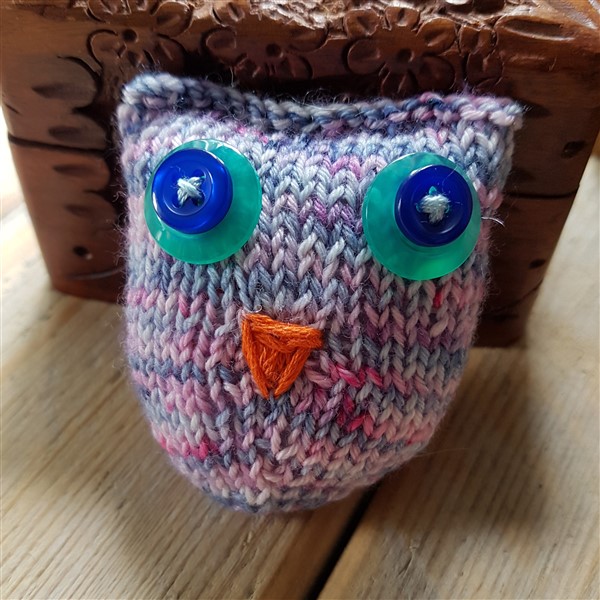 Designed to be knit in the round, the owls can successfully be knitted on straight needles and seamed, which is what my daughter did here with her little chap.

We all used 4ply weight yarn and 2.5mm needles to keep the owls nice and compact and what’s interesting in the photo at the top of the page, is how all of our tensions differ and the effect this has had on the size of the owl. 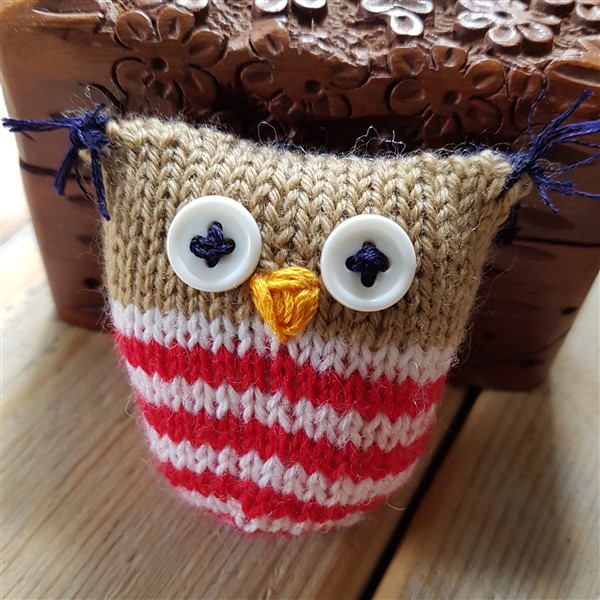 Once I’d collected in all the owls and I’d knitted mine (Cork colours for the die-hard recipients), I got to work on the mobile.  Initially, I was going to use an embroidery hoop, but I thought it might be fun to play on the ‘wise old owl’ idea.  In my head wise is often linked to books, which is where the idea to use a book came from. 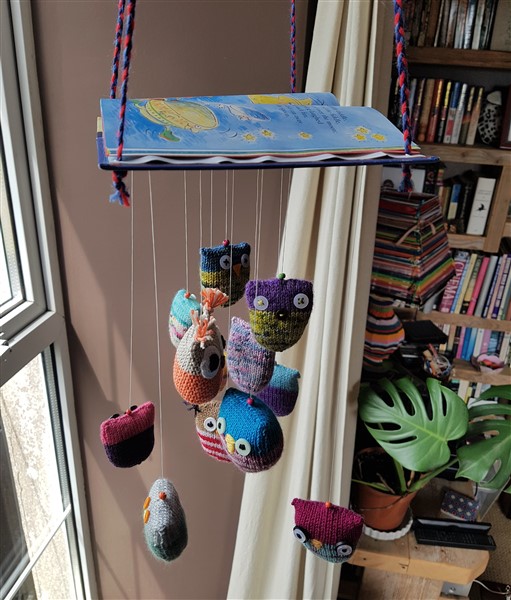 I’m not going to lie, it was a little fiddly to put everything together, measuring, drilling, glueing, threading the owls, making sure they were the right length, making the cords to hang it from, etc, but I think it turned out pretty well.  Maybe even better than I had pictured it in my head.

The eagle-eyed among you might have spotted a crochet owl?  I think the design Goosey Lucy used was the Baby Owl, by Forever Stichin, which is also free to download on Ravelry.

It’s difficult to photograph, but this little video I shot in my garden shows it off better.  (it looks like it’s sideways, but it flips once you play it)

Of course, now we’ve made one Wise Old Owl Mobile, we’re going to have to make more and the next baby is due in September.