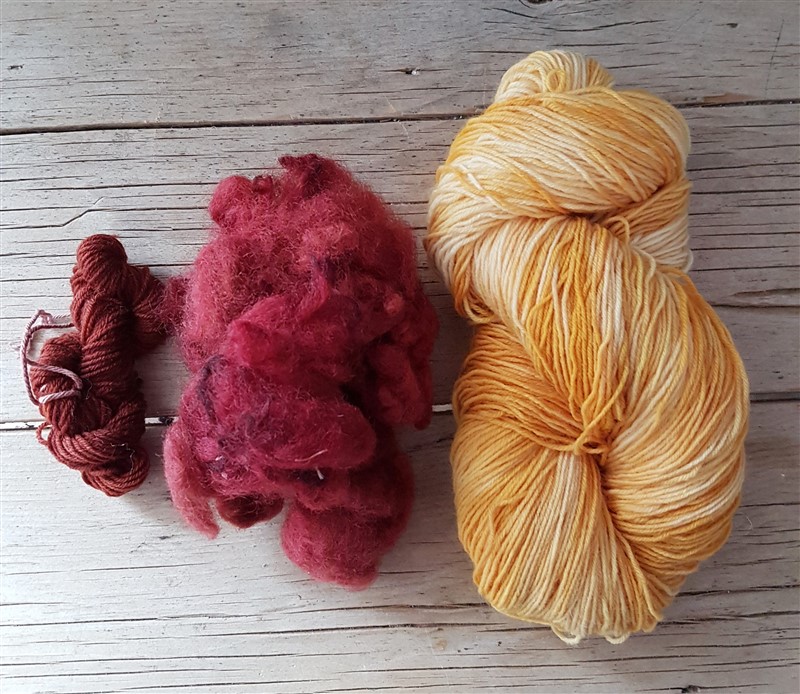 Hopefully you’ve had a chance to read the article about the day we spent solar dyeing up at my house with the other members of the Cork Guild of Spinners, Weavers and Dyers and some knittterly friends in Issue 5 of Olann and?

It was a gloriously sunny day and I think, everyone enjoyed themselves and managed to take something away from the day.  My plans for the nature loom went better than I’d expected and we all managed to get at least one mini hank of yarn, fibre or cloth, set to dye in a jar by the heat of the sun.

I had already put 100g of sock yarn (75% wool/25%Nylon) to soak with onion skins in a giant Kilner Jar a fortnight before we met, so we’d have an example to show everyone.  The yarn had been cooked in an alum mordant for about 45 minutes, before I submerged it with the onion skins.

As you can see from the photo, I was fairly liberal with the brown onion skins, which I stuffed into the jar in a very haphazard fashion.  To ‘wake’ the dye, I turned the jar upside down and let the water run from the bottom to the top of the jar everyday, before turning it back the right way up.  I also turned the jar a quarter turn, which, because the jar is square in shape was easy to do.

At the dyeing day, we bathed mini hanks of yarn (sock again) in an alum mordant and could choose which natural dye stuff to try.  Intrigued by the pinkness of the Madder Root, in comparison to the Madder Root Powder I used to dye the yarn for the Libran Shawl, I opted to give it a try.

In the second jar, there is a little washed fibre, which had been previously mordanted with chrome, with some more of the Madder Root.  As chrome is highly toxic, it was safer to have pre-prepared the fibre before the day.

After a few weeks left basking in the sun (ahem… actually it was more like a couple of months), the resulting colours are really quite interesting.

The sock yarn mini, has turned a lovely deep rusty brown.  The colour has completely saturated the yarn and had I not thrown the root flakes away by mistake, I’m sure they’re would have been some more dye left in the exhaust.

The runaway success though, has to be the onion skin dyed hank of sock yarn, which has turned a lovely golden yellow.  The variegation, from where the onion skins touched the yarn has created a beautiful tonal effect.

With over 400 metres of yarn to play with, I’m a little stumped as to what to make.  I love it so much I’m happy to just have it at the moment and may have to dye another hank with natural dyes to use together with it. 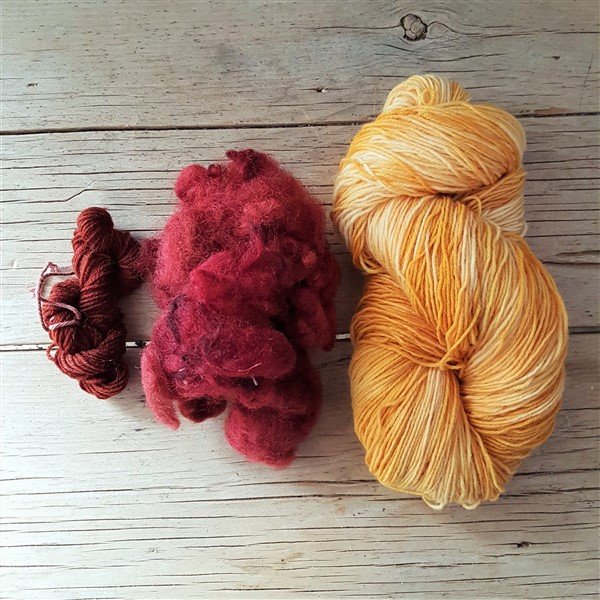 Which one is your favourite?

It was particularly lovely to see how everyone else’s solar dyeing had worked out too.  The photograph above contains just a few of the different examples.  I’m always surprised at how different fibres take up the dye.  The boucle yarn towards the bottom of the photo on the right, is just gorgeous.  The blues on the left were dyed using food colouring and the bright yellows were achieved using Weld or Dyers Gold as it’s more often referred to.

I can see another crafting rabbit hole on my horizon.