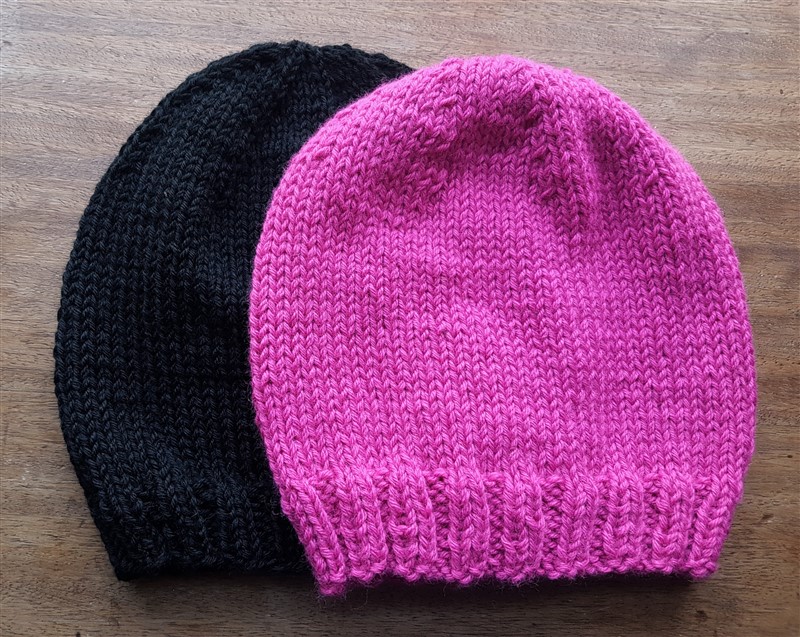 In 2017 I really amped up my handmade gift making, between knitting, crochet, baking, etc, I really tried to be more mindful of the gifts I gave. Whilst I hope the presents were appreciated and will be useful,  what surprised me most about it, was how it made me feel.  The joy of making something specifically for a loved one, friend or in the case of charity knitting, someone in need, has me wanting to make all the gifts I can in 2018.

The last group of people that I wanted to knit a little Christmas gift for were my daughter and my sons girlfriend.  Sticking to the all important plan set out in Part 1 of this post.

The chosen pattern(s), must be

Easy as pie, because a good chunky hat is always a winner, well definitely when it comes to Dina, my daughter.  My sons relationship is still in it’s infancy, so I was hoping a hand knitted hat wouldn’t be a bit too full on and scare the poor woman away. 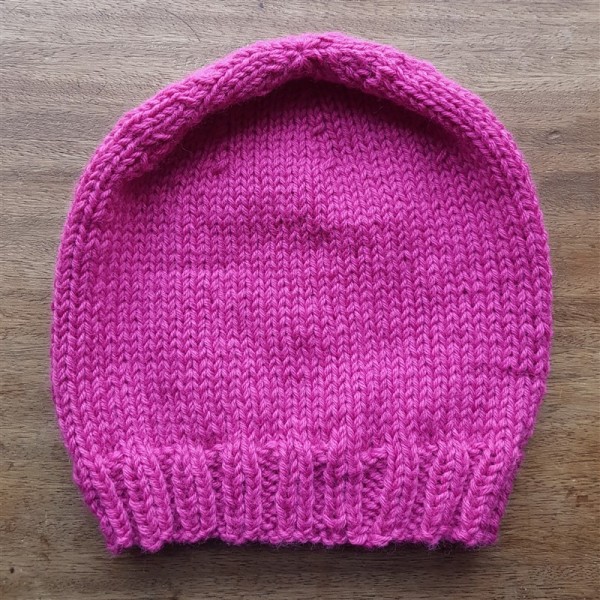 I always knit the same hat using chunky weight yarn, longer so it has a bit of a slouch and can still be pulled down to cover your ears, when it’s really chilly.

Dina had expressed her desire for a bright pink hat whilst we were on our Dublin yarn crawl, but we forgot to look for a yarn while we were together.  Chunky weight yarn is a little underrepresented in my Yarn Museum, however, there’s enough double knit to insulate a house with.  After a little rummaging (more like a lot actually) I decided to use two strands of Adriafil’s Mirage in shade 53. 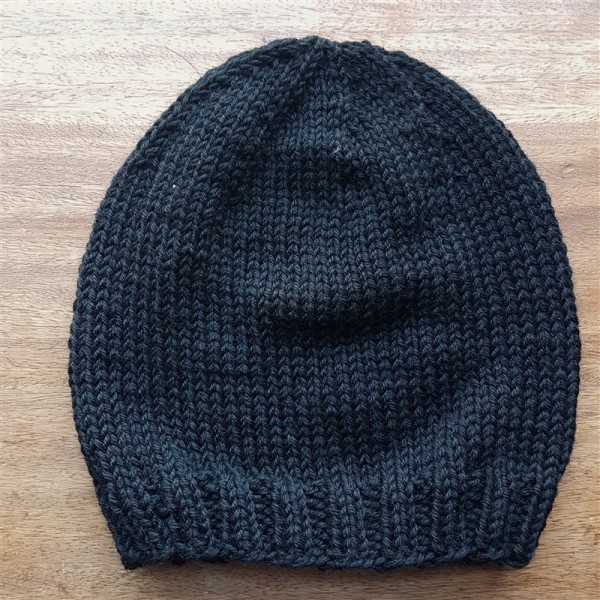 Choosing to go for the ‘safer’ option of black for Sinead’s hat, I doubled up with the Mirage again, this time in shade 01.  Happily, I can report that it’s been a hit, it’s well worn and looks great on her. 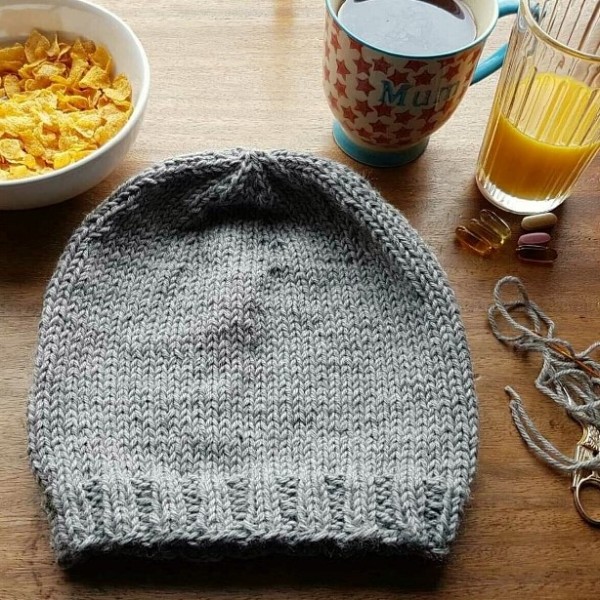 So much so, that I felt confident enough to make her another one for her birthday later this month.  I whipped it up in next to no time and sewed in the ends yesterday morning before breakfast.  Mirage again in shade 52, still playing it safe with grey I know, but maybe I can make a brighter one next time. 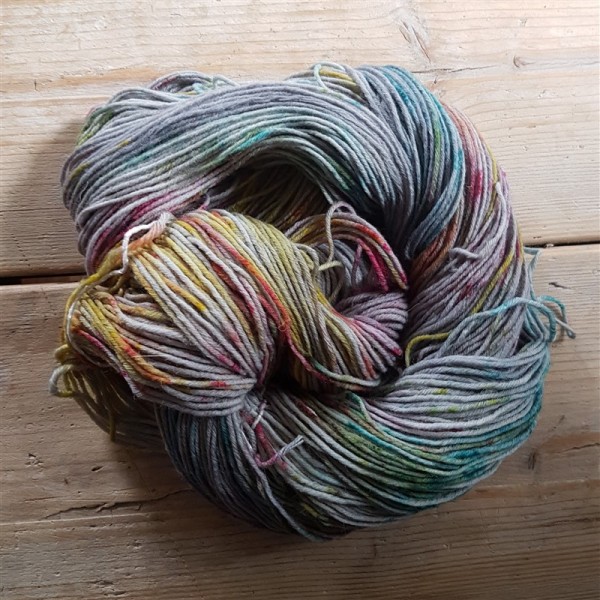 There are two presents I didn’t get to make, but I will rectify that over the next few weeks.  This gorgeous hank of yarn was created by Gabriella of Irish Fairytale Yarns especially for me.  My mum had her eye on the Quaker Yarn Stretcher that I made some time ago using Art by Colinette.  Sadly, they’re no longer trading, so I was unable to find any of their yarn in a shade that I really liked.  Undeterred, I emailed Gabriella and explained what I was after and after a little playing, she came up with this gorgeousness.  It’s worsted weight sock yarn and it’s called Lora Special.  Well it’s not really called that, but that’s what’s written on the band, so…….

In other news, knitting for the next issue of Olann and is full steam ahead and I’m expecting there to be smoke coming off my needles as were waiting on yarn to arrive for at least two of the designs.  I’ll be knitting every minute I can spare to ensure my samples are made (nothing new there I guess). 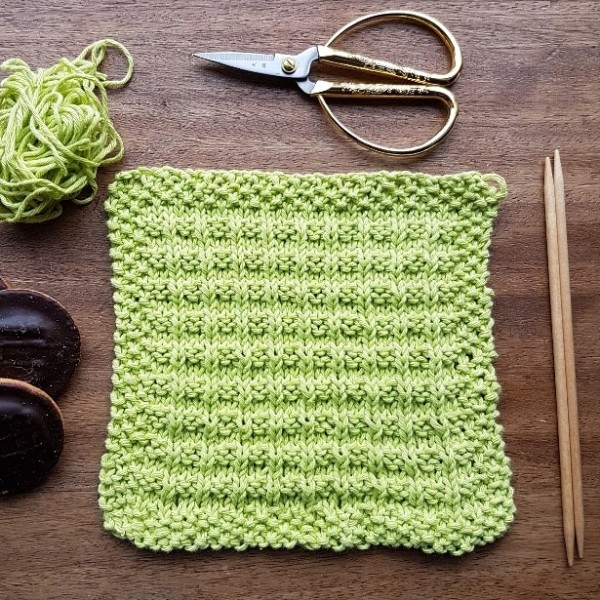 Washcloth number four for the #yarnhoarderdishclothchallange is this little lovely.  The design is called Baby Face Spa Cloths by Little Church Knits and is one of four different ones included in the download.  The pattern calls for more stitches, but I opted to cast on thirty five, which has resulted in a much smaller cloth.  Better suited to washing a baba in my mind, so a bit of a happy accident.

I’m still two washcloths behind, three if you count this week, so I think I’ll probably run up a few that look like the Grandmother’s Favorite (American spelling).  Quick and easy, perfect for catching up.
That’s finally it for the 2017 Christmas makes, if you don’t count the two I didn’t get around to.  I think it’s fair to say that as it’s now two weeks into February, I could really do with being a bit more organised 😳