Well it was bound to happen sooner or later I guess?

I’ve hurt my shoulder and I can tell you, it’s impacting on my life more than just a little right now.  Ironically, I don’t think it’s from too much knitting, instead I’m pretty sure it’s from too much driving to woolly events.  It’s sore to knit, worse to type and driving is up there in the OUCH! category at the moment, hence my conclusion.

To be fair, I have driven an awful lot in our quest to publicise fibre fiestas in Ireland for Olann and.  I was in Mayo from Friday evening to Sunday Morning, some 4 hours 40 minutes of a drive each way and then I was in Dublin on Monday 3+ hours there and back.  I’m convinced my bum has pressure sores and I’m surprised it’s only my shoulder that hurts.

I’m sure it’ll ease up soon, I’m using a heat pad regularly, stretching and trying not to do too much knitting, typing or driving.  I’ve also relented and am back on the anti-inflammatory pills (that I’m supposed to take), to try and mend it as quickly as possible.  I’ve too many things to get ready for the next issue, so forgoing knitting or typing is simply out of the question.

I managed to get a little knitting in at the Atlantic Knitscape Knitting Retreat in Mayo whilst chatting, although not as much as I’d hoped.  I’ve finished the third repeat of the lace pattern on my Nellie May Shawl and am considering doing a couple of rows of stocking stitch, followed by a picot binding, a’ la Catherina’s here.  Isn’t it lovely?  I’m a little worried, that as mine is ‘in your face orange‘, it might look a little odd.  I don’t plan on working on it just yet, so I’ve time to ponder.  What do you think – yes or no?

I also completed 20 odd rows on my Climb Every Mountain, but had to rip back the majority of it, when I realised I’d added the eyelets to early (doh!).  The less said about that the better 😦

I gave in, succumbing to all the lovely projects and cast a Milo on and am only a few rows into the body, having opted for a cable panel.  I’m using yarn we were sent to include in the review section of the magazine, as I was completely smitten by the colour.  I can’t show you it now (sorry), I’ll fill you in proper after we publish, promise.

I’ll be writing an article about the knitting retreat for the magazine, so you’ll hear all about it then, but I can share my woolly purchases with you here at least.  Aren’t they pretty?  Again the light isn’t great again today, so my photos are either a little dull or over exposed.  It doesn’t help that I stood in the light a little and caused a shadow or two (oops). 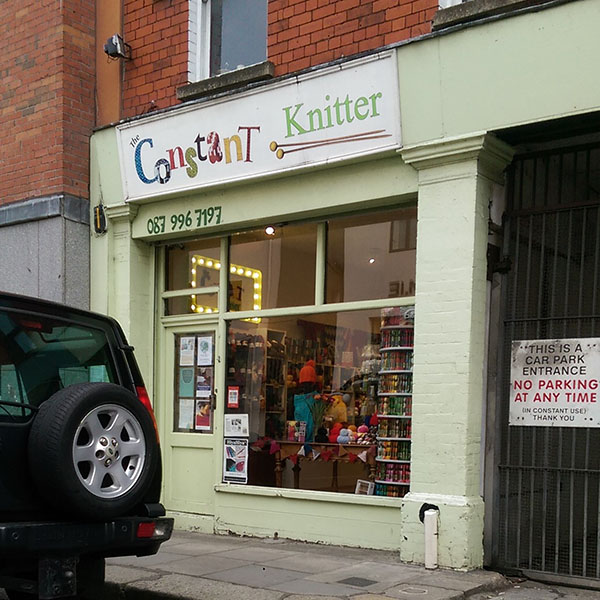 Cat Bordhi is in town and well worthy of a trip to Dublin, regardless of how fed up of being in my car I was.  A trip to The Constant Knitter is a real treat anyway and I got to meet lots of lovely woolly people and even had an excuse to make a purchase or two as I’m in need of knitting needles (honestly).

It was fantastic catching up with Rosemary and perusing the shop, with it’s shelves of woolly temptation.  Happily I bumped into Diane from the Dublin Knit Collective and Laura from Ellie & Ada Yarns and a few of the ladies I’d been with in Mayo too.

Cat Bordhi is the reason I love to knit socks, her method of knitting them on two circular needles had me hooked from the moment I tried it.  I could without pausing for breath, gush forever and a day about what it was like to meet Cat and her brother Jim and I will, but with my other hat on.  You’ll also get to hear about somebody else I had the good fortune to meet there too. 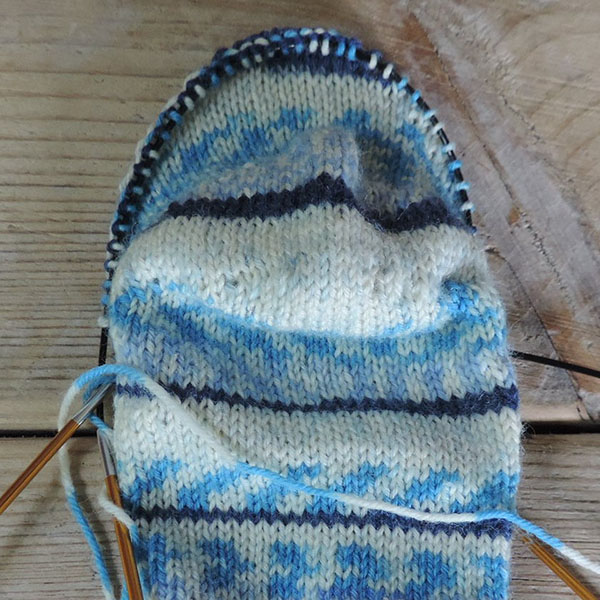 In ode to lovely Cat, I have worked my very first Sweet Tomato Heel on my latest pair of socks.  It could be better, but my shoulder was already hurting on Sunday when I knitted it.  I worked three wedges and the fit seems to be quite good, but I’ll know more when I have a completed pair to wear.

The Toasty & Textured hat I was knitting using Drops Andes yarn, has been keeping my head lovely and warm, when I wear it in my office.  Does anyone else suffer from cold ears? 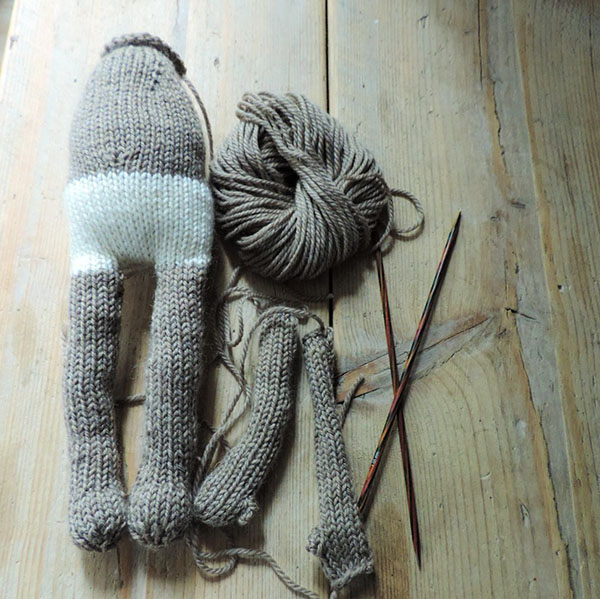 I haven’t got much further with the Barbara Fuzzy Mitten Mystery KAL since we last chatted.  It’s not much of a mystery now as it’s a she, but it’s well worth joining in if you have time.

Another pair of socks are on the needles too, it’s another yarn we’ve been sent to review and I really couldn’t let it go to waste this time.  By waste I mean, stashed for use later (just in case you thought I’d throw it away).

It’s also the reason I needed to buy yarn from Rosemary for my Afterthought heel, I just hope one of the colours I bought works.  I wonder, can you guess what colours the stripes are?

Well I guess that’s probably more than enough typing in one sitting, I should probably do some stretches and apply a heat pack again.  It’s the perfect excuse for a knitting podcast and a cuppa 😉 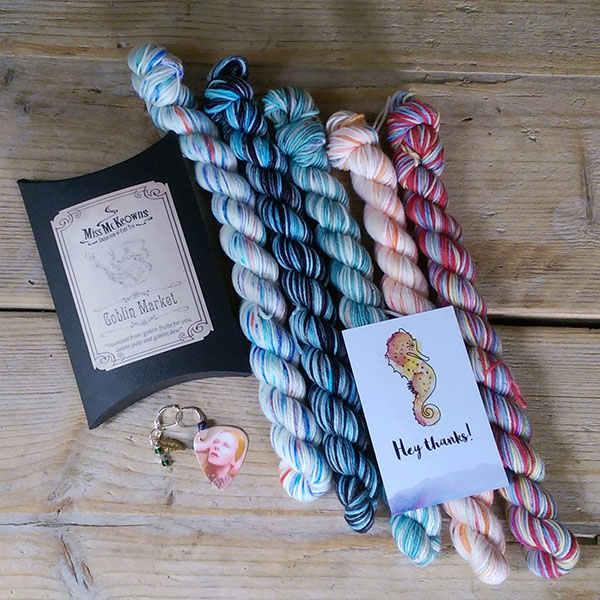 Before I go though, did you see the Famous Five Yarn Club from A Fine Fish Yarns?  Mine arrived in the post yesterday.

You can sign up for a month, two months or three months, the choice is yours.  Each month you receive –

What’s not to love?