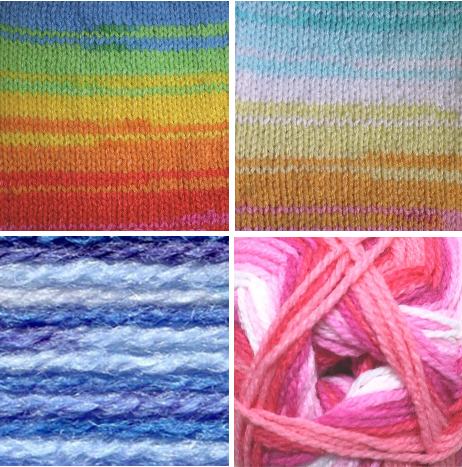 The reaction has been great, with the inital stock selling out in the Rainbow almost immediately.  I myself, think it’s rather lovely for baby and children knits and the 100g ball seems to be never ending with a whopping 321yds/294m.  So I’ve decided to add a few more shades to the range, top left it’s Starburst, top right is Candy Crush, bottom left is Blue Denim and lastly on the bottom right it’s Strawberry. 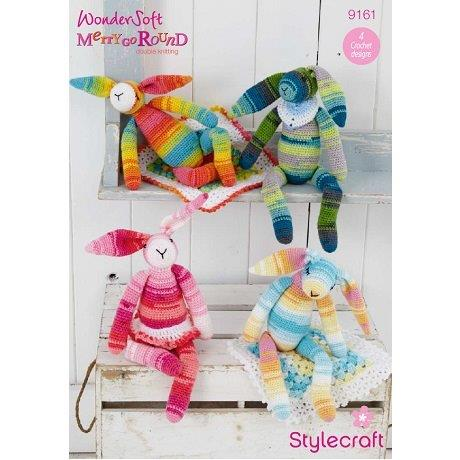 There are some lovely little patterns for the Merry Go Round yarn, but as it’s a standard double knit weight it will work as a great substitute with most dk patterns.  I’m rather smitten with these crochet soft toys from pattern 9161, but I’m not convince my crochet skills are sufficient.

I finally managed to get one of the blocks made for the Stylecraft Lilly Pond CAL, but I still have to sew in the ends (so many ends) and make a further three of these too.  The next clue, for the second block is due to be released on Tuesday 21st April, so I’ll be way behind, but it’s meant to be fun isn’t it?

The eagle eyed amongst you will have spotted that my piece measures approximately 53cm, a whole 8.5cm’s longer than the recommended length of 44.5cm

It’s also a centimetre taller, but after talking to friends that are taking part and reading through the posts on the Facebook Group Page, it seems like most people are coming in around this size too.  So I’m keeping my fingers crossed and hoping everything comes together without too much extra work 🙂