Please Miss, I’ve got a note.

I can’t remember a time before, when I have left it so long before posting something to my blog?  In truth, I’ve been on a bit of a general hiatus from everything but the day to day of ordinary life, due in no small part to the dreaded time of year.

What is it about our capacity to forget?  As women we swear we’re never going to have another baby straight after labour and like mad fools, most of us find ourselves back there and only then, realise what’s to come.  Now I know we’re meant to release a hormone to help us forget, but for me personally, that hormone’s charm had worn off when I was sitting in the hospital ward, waiting to be induced with my eldest son.

Perhaps, not quite in the same league as giving birth, this time of year is a bloody nightmare for me and thousands of other people like me.  Somehow, like a total fool, once the season stops, I forget all about it until it comes around again the following year and the misery begins again.

How can something so little as a grain of pollen, create so much distress and misery?  I’ve had Hayfever since puberty, or at least that’s when it was first diagnosed, but apparently, more and more middle aged people (that’s me officially), are suffering with it too.  Something to do with an aging and therefore compromised, immune system, or at least that’s what they think it could be.  Which has got me to thinking about the effects taking medication to suppress my immune system for my RA, could be having on my allergies?

The Hayfever sets me off and I suddenly have problems with  everything from dust to my dogs and even wool.  Living in a big dusty farmhouse with four dogs and an addiction to all things sheep, might not be the best lifestyle choice?  I guess in truth, I must have a problem with these allergens most of the time, but they’re obviously not bad enough to be too troublesome throughout the rest of the year.

If you’re one of the lucky, non suffering people out there (sod off), no seriously, be grateful because it’s no laughing matter.  If only it manifested itself as a few sneezes and a snotty nose.  For me it’s everything from painful swollen itchy eyes, to extreme lethargy and even dizzy spells.  Bliss would come in the form of being able to put my finger down into my ear canal and scratch, or being able to drive somewhere with the windows down and not sneeze continuously.  I defy even the strongest pelvic floor muscles to work properly after your fifteenth sneeze in a row.

So it’s not really surprising that my knitting mojo has taken a bit of a dive of late.  However, my enforced prison sentence and subsequent frustration, is having some effect at last and my knitting needles have been in hand much more of late.

I’m busy making a Pinwheel Blanket, which I can’t really talk about at the moment because it’s for an Olann and thingy, but it is turning out rather lovely, even if I do say so myself.  I love it and can’t wait to be able to share it, so more about that soon.

There have also been adventures into sock knitting.  On the last episode of our podcast, I mentioned that my Portuguese Knitting tension is much tighter than my standard throwing tension.  I showed the sock I had knitted prior to switching techniques and the one I had been knitting in PK and spoke about how, as they were for me, I could live with one being a little tighter.  If you saw this photo on my Instagram feed, then you’ll know I did eventually rip the second sock back.  Not because it was too tight, but because I had stupidly forgotten to consider that my rows would also be coming up smaller. (doh!)

Having taken the completed sock out of my bag to check something, I popped both down on the table and when I looked back to my knitting, I noticed the difference straight away.  The new sock, despite having the same number of rows, was about half an inch shorter from the cuff to the heel and I was already near the toe!!!  It’s obvious when you think about it too, but apparently I had managed to completely overlook it.  Feeling slightly annoyed with myself, I ripped the whole thing back there and then.

On reflection and with time to consider my actions, this probably wasn’t the smartest thing to do, as I hadn’t considered the possibility that I could have knitted the first sock at a much looser tension.  I was making that sock when my hands were causing me the most grief.  They were extremely swollen and sore and the sock was more an exercise in stubborn determination than anything else.

So rather than cast the second sock on again using 3mm needles as I had planned, I decided to cast on another pair of socks, using a yarn that I have used time and time again (Opal), so I can make a true comparison.  I went searching through my large collection of needles for two pairs of 3mm circular needles, but as it’s not a size I use often, I had to resort to using 3.25mm. 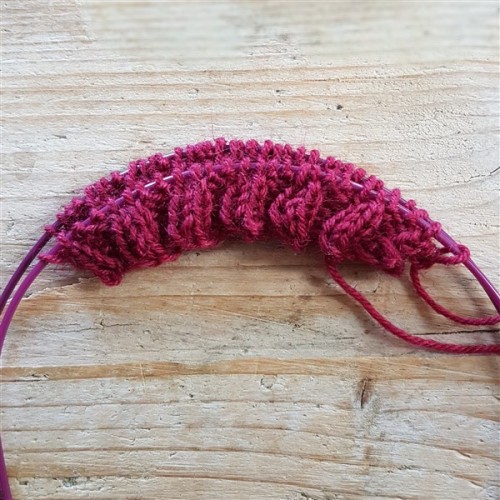 Casting on a 2×2 rib cuff in Drops Fabel, it’s obvious even from this photo that my 60st sock is far too loose. 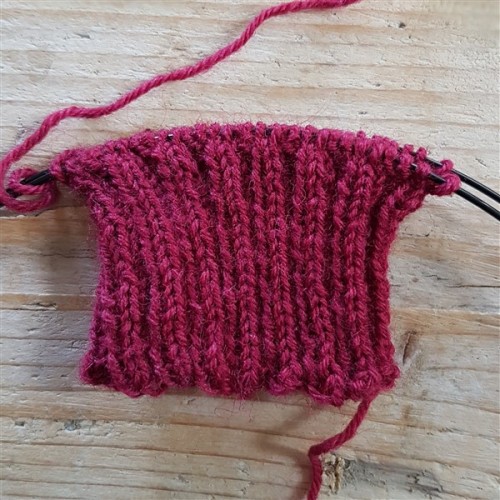 Leaving, these stitches on my needles, I drew the yarn from the other end of the ball and cast on using a 2.5mm (the size I had used for the yellow and blue socks originally). 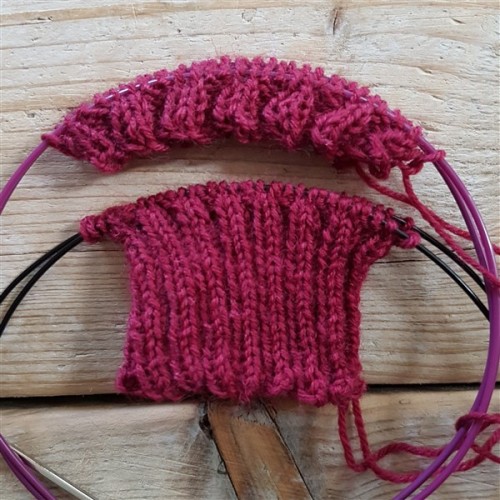 As you can see from the photo the 2.5mm cuff looks to be a pretty good tension.

As does the stocking stitch leg of the sock.  It might be a little tighter than before PK, but the fabric is no where near as firm as on the ripped sock.

Our knitting tension can fluctuate, which is why it’s always a danger to have lots of different projects on the go at any one time.  Most of the time, the difference will be minimal and if it is a problem, we usually slip back after a couple of rows.  If it’s something you notice you do, there are a couple of things you can try.

The first, is the most obvious, only have one or two projects on the go at any one time.  I’m a huge advocate of having one large and one small project on the needles, so you can pick and choose to suit your mood, but any more than that and the risks begin to increase.

Secondly, when you make your tension square and if you have enough yarn, leave it on the needles and use the same size and preferably the same brand of needles, to knit your garment.  if you have to leave your knitting down for any length of time, try knitting a couple of rows on your tension square, before picking up your project again.  It’s not an exercise in tension this time round, it’s more about getting your hands to remember what it feels like to work with that yarn again.  Hopefully, if you’re sitting comfortably and feel nice and relaxed, you’re hands will work their magic and your tension will be seamless.  You can then return to your original project and knit away.

It’s also worth remembering, that leaving your project down for longer than a couple of weeks or so, could cause a ridge to form in your knitting.  This is more likely to happen if you knit using straight needles and if you’re using a pure wool or high content wool blend yarn.  If this is the case, it’s always advisable to rip back a couple of rows, before continuing on anyway, as blocking doesn’t always remove the ridge.

I’m going to continue working on this pair of socks, so I can compare them to both the single yellow sock and the others in my sock drawer.

As for the battle against my biggest enemy.  I’m resorting to combat tactics.

One of the reasons to be thankful for living on a farm – no one is likely to see me and those that will, know I’m nuts anyway.