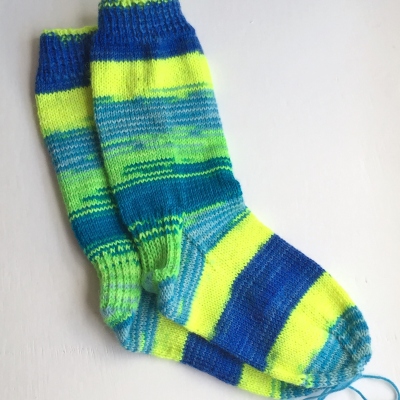 Whilst in the grips of ✨weaver fever✨ I’ve still been doing the odd bit of knitting, but even that’s gone a bit bonkers, as I seem to have found myself gripped by sock madness.

Despite having (pause to clear my throat) several 😉 projects on the go, with more on the ever expanding ‘to do’ list, it seems I really am just happy making socks.  Maybe it’s because they require little or no effort, except when it comes to the heel and toe.  Could it be that they’re just so portable.  Perhaps it’s simply because I love my socks.

Whatever the reason, things got a little out of hand last night 😵⚡️🐒

The socks in the photo at the top of the post are my Comicon socks.  You might remember I bought a ball of the shy, retiring yarn, whilst taking Kye to London at the beginning of the summer?

The socks, I have to admit are beyond my expectations, I can”t wait to wear them and I would, only they’ve come up a little small 👎

I switched from my usual 2.5mm needles to 2.25mm needles after having a discussion with Dr. Sock about how both of us felt our tension was becoming slightly looser.  In my head I’d computed the difference and had allowed for the slight change this could make in the finished sock, but of course this doesn’t mean I remembered when I was knitting.  Actually to be fair, I did remember whilst knitting the leg part of the first sock, but then I completely forgot when I’d finished turning the heel and working the gusset.

In my defence, I was closing the shop at the time.

Usually I’d try my first sock on when it was finished just too check everything was right before moving on to the second, but of course I didn’t.  Luckily, I copied the first sock, so both of them fit perfectly on the leg and heel, they just need to be a tad longer. 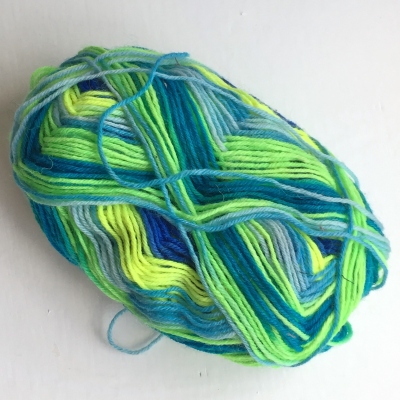 Now I have a pair of socks that need their toes ripping back so I can add five or so more rows.  Luckily, I have plenty of yarn left to do this, but it just seems like too much to concentrate on at the moment though.

Much like picking up the stitches to make the gusset on this sock did last night as well.  My living room can be quite dark and I was too comfortable to move to the kitchen, well that and I was enjoying watching the episode of Eastenders I’d recorded earlier 😱

So what’s a girl to do, when her knitting just isn’t happening?

Yep, you guessed it.  I cast on another pair of socks 🙈🙈🙈

Must be going through some kind of orange phase.

The needles ar Knitpro Nova Cubics, they’re also 2.5mm and I’m not sure I’m going to stick with them.  To be fair, they do feel so much better than your standard coated steel knitting needles that you see everywhere.  They’re still metal though, so they are no way near as comfortable, flexible and quiet as my usual choice of Knitpro Symphonie, Cubics or Karbonz.

I’ll let you know if I change over when I’ve done a bit more knitting.

I am considering mixing it up a little, only a little though because I’ll still be using 4ply.  So many of my friends are expecting and I’m way behind on knitting gifts, so I think it might be time to crack on with a little Newborn Vertebrae by Kelly Brooker of Pekapeka Design Studio.  I’ve never made one before and it looks interesting, what do you think?