My effort to knit or crochet as much as possible in 2015 is going well so far, six weeks have passed since the bells chimed in the New Year and I’ve managed to get a ✌️ second ✌️ pair of socks for my (always cold) tootsies knitted.

The yarn I’ve knitted is one I fell in love with on Instagram from Yesterdaydream; it’s their 4ply Superwash Merino wool in County Fair you can find their Etsy Shop here.  As the yarn is so  pretty, I stuck with the plainest of sock patterns which meant they were great for working on at knitting group and the cinema 👍 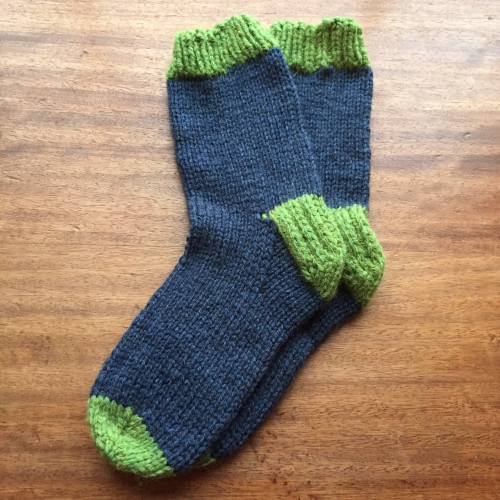 I’ve actually made another pair of socks too, but they don’t count towards my ‘pair every 2 months’ challenge to myself as they were a gift for the lovely Léann, my sons girlfriend.  They’re chunky socks because she’s currently in Poland on her Erasmus and it’s mighty chilly there .  I adapted them from the Basic Chunky Sock Pattern from Patons that I was singing the praises of recently on the Facebook Page.  I used the Serenity Chunky yarn from Wendy because the alpaca fibre should help with added warmth and I love the colour range too 🌈 I would probably have managed to get the pair (size 5/6) out of the one ball at a push, but had already decided to go for the coloured heel and toe.  If you decided to knit them yourself I’d err on the side of caution and have an extra ball to hand just in case.  The pattern calls for 6mm (I think) and I’ve used a 5mm to make the socks more dense, they’re still soft and cosy and are great as boot socks or for padding around the house in as slippers. 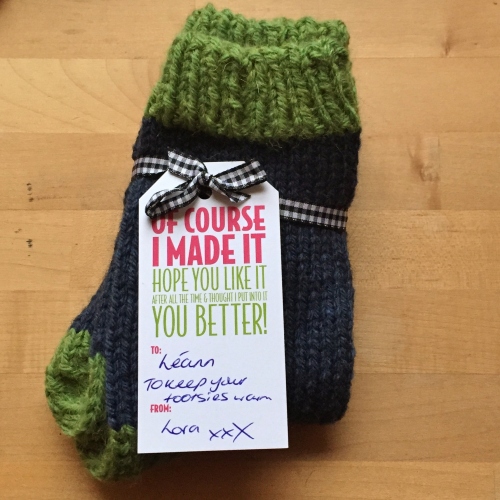 I love my tags, which have washing instructions for you to mark on the reverse.  I’d taken this photo with the intention of saying where I bought them, but I’ve completely forgotten :-0  A search on Etsy turned up some lovely ones though. 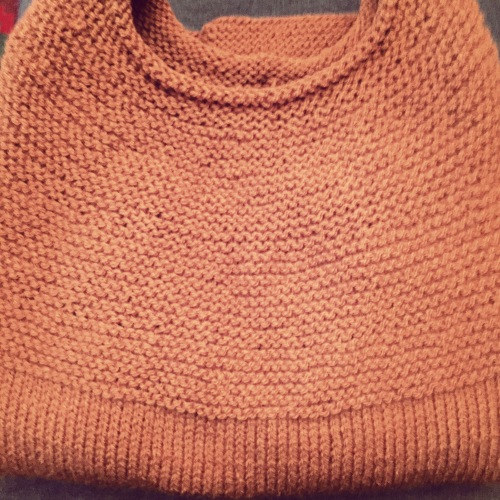 I also finished the Cobblestone for Du as promised, but the word disappointed doesn’t even come close to describing how I feel about it.  I even knew before I’d finished it, but you still live in hope don’t you?

So what am I unhappy with?

1) It’s too big – I made the medium and should have made the small.

2) It’s too boxy – probably a combination of the pattern and point 1 above.

3) The garter stitch yoke is clumsy looking – I think if I could bring myself to knit it again I’d switch to a smaller needle for the yoke.

4) The wrapped stitches are a little too obvious for my liking.

5) The yarn I used is rather unforgiving for this pattern, Sirdar Bonus Aran is a good basic yarn, I’ve used it several times before and have always been happy with the finished project.  However the wool content is minimal and had I used the yarn I purchased originally for my son (a beautiful 100% Blue Faced Leicester), the jumper would have probably turned out much nicer because wool is springy and more forgiving.

I’ve also finished crocheting another shawl for myself, but as you can see there’s the small matter of ends to sew in yet.

Having finished (or nearly finished) a few of my projects it seems only right to cast on again, doesn’t it 😉

My next pair of socks are going to be a pink stripey affair, plain again to facilitate easy knitting whilst talking. 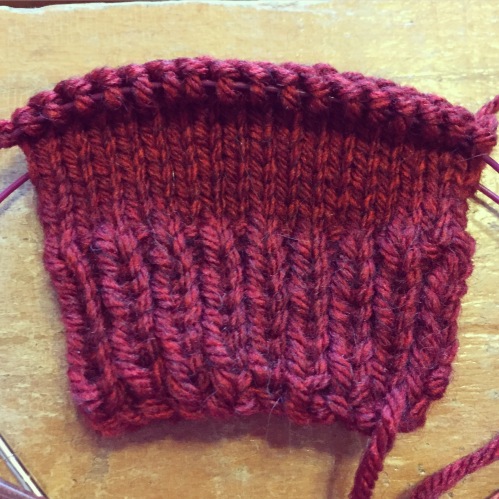 I’ve another chunky pair on my needles too, as I’m teaching a friend how to knit socks.  I’m quite smitten with the pair I made above so thought they might be the best way to go in this instance.

I’ve also cast on a Flax in the medium/large size using Rico Country Aran for one of four of us Kye won’t wear anything resembling a woolly jumper.  Fingers crossed maybe, just maybe it’ll work out right for Du to make up for the enormous Cobblestone.  Sixteen hundred and eighty projects on Ravelry, including one from Dina is a great indication of how popular this pattern really is and if that wasn’t enough to convince you, it’s a Tin Can Knits design too.

🌻 Happily 🌻 though, I can report that he is actually wearing it, mostly in the office/sewing/gaming room that we all share and which can be a little chilly even when we’re all in there.

If you look closely, what looks like bobbles are actually threads that he gets covered in from working on his latest sewing project, more about that in a few weeks 🙂