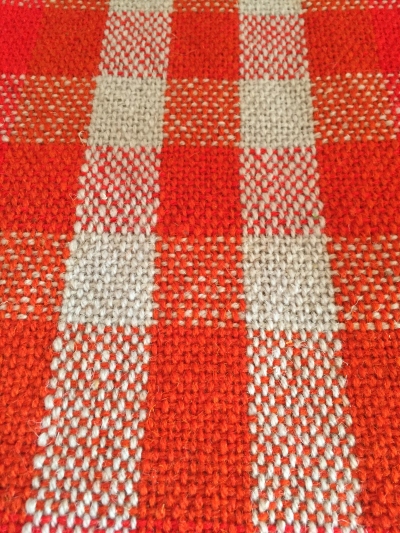 You might have noticed by now, that my knitting needles haven’t been getting much use of late?

Don’t worry, I’m not ready to put them away just yet, it’s purely an enforced pause due to the dreaded hayfever season.  Sadly, along with thousands of other people I suffer horrendously at this time of year.  To add insult to injury, I become sensitive to everything including dust, wool, my dogs and even the Vaseline you can dab on the outside of your nostrils to catch the offending pollen particles 😦 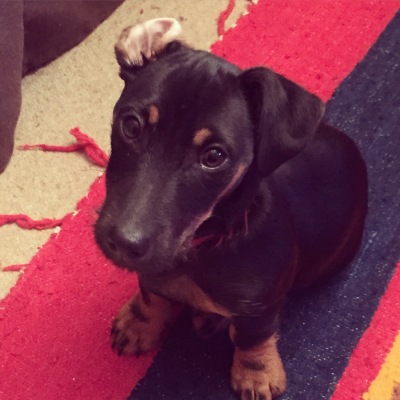 My poor puppy, ♥Errol♥ is having to make do with sitting on the sofa with me rather than on or next to me and the knitting, which is mostly pure wool, as it tends to be my favourite, is staying in my project bags most of the time.

However, a life without fibre, is in my opinion just not right and happily, I still seem to be able to play in other ways, with just the odd sneeze here and there 🙂

I’m rather ashamed to admit to owning quite a lot of fibery equipment that, in most cases, has never really been used.  Some of them were ‘complete bargains’, gifts, specially made (sorry husband), or bought with the best intentions, but a lack of time to learn how to use them.

Weaving, is something I love and have been fortunate to attend a couple of tapestry weaving classes now and I always get far too carried away when I do basic weaving with the children I teach.  Since Christmas we’ve made wall hangings and Gods Eyes and I’ve bought Hula Hoops to try and use them for a group project at some stage.

So it probably will be of no great surprise for you to hear that I own a few looms?  One of them is a little bit intimidating (a floor loom, disassembled and stored) and falls into the ‘absolute bargain’ category.  I also own a peg loom (thank you husband), several tapestry frames (husband again) and a Ashford Rigid Heddle Loom that I’ve been dying to play with if only I could find the time. 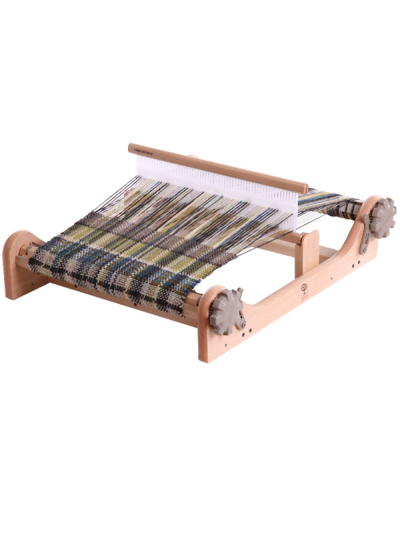 Cue hayfever and cut to the loom →

Along with the ‘complete bargain’ loom, there were several boxes of weaving yarn, warp thread, tools and equipment, which all just added to the ‘deal to good to pass up on’ feel of the transaction many years ago.  The yarn is mostly the heavy weight, rough rug weaving type of thing that makes your neck itch just looking at it.  I love the colours though and find the more than slightly rustic look of the yarn, quite appealing, I just don’t see myself wearing it. 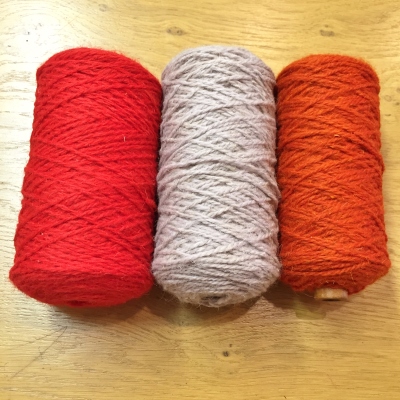 After selecting my three colours  and watching the Ashford How to Warp Your Rigid Heddle video on Youtube several times, I began to warp my loom.

At this point,  I could lie and say “I’d checked the thickness of my yarn by wrapping it round a ruler to see how many strands it took to make a inch (WPI’s) and then selected the appropriate reed – that’s the plastic bit that determines the set (lay man term – spaces) at which your warp (up and down) threads run through your finished fabric.  I didn’t though, I took the picture after.  Instead I winged it and used the 7.5dpi (I think I barely understand what this means myself, certainly not enough to explain it yet) reed that came with the loom, which is basically the one for medium thickness yarns

Having warped my loom, which took much longer than it should have, I was able at last to get on with some weaving.  I completely forgot to take photos of the process which was more experimental than anything, but happily it ended up being usable. 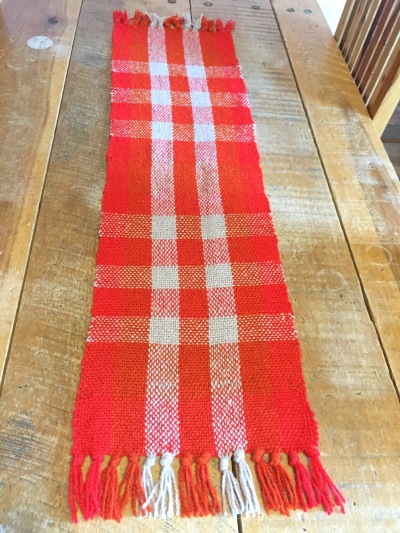 I didn’t make my warp long enough for my table runner to stretch the full length of my kitchen table, because it’s purposefully over long and rustic.  If you’re wondering, my ever suffering hubby made it for me, it’s based on my dads work bench which I loved and reminds me of him every day ♥

The weaving was an experiment after all, even the pattern ended up being a happy accident, one which just evolved and then I repeated. 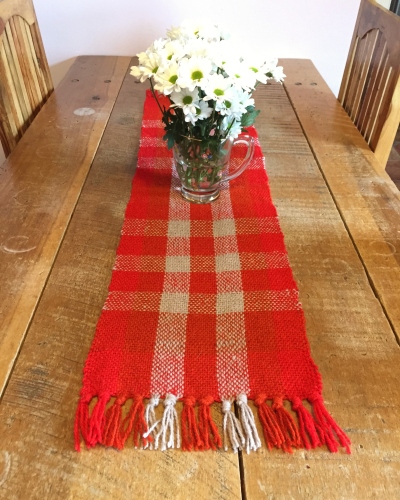 I think it’s rather lovely, even if I do say so myself. 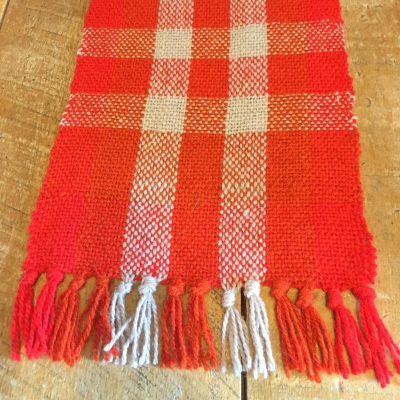 Look at those tassels too (don’t look too closely at my edges please). 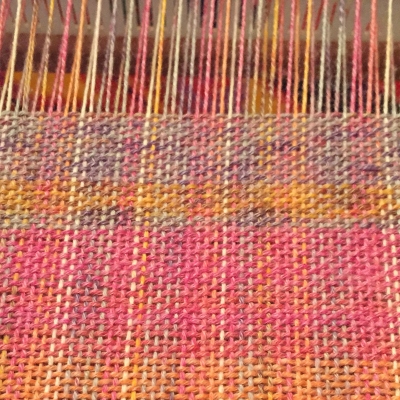 I found I’d enjoyed myself so much I couldn’t resist warping up the loom again.  This time I’m using sock yarn and I’m hoping to make a scarf.