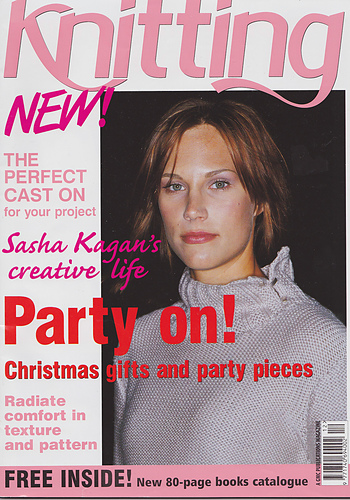 So in the last post I covered 6 of the many knitting and crochet publications available in the UK and Ireland.  I’ll have had a yarn shop for 10 years in August and my love of knitting magazines goes back further than that.  I remember buying the first few issues of Knitting Magazine from The Guild of Master Craftsman Publishers when they first came out in 2003.

Actually, thinking back I can remember looking through my mums copies of Golden Hands from the 70’s.  Not strictly a knitting magazine, they covered lots of different crafts too like crochet and dressmaking.  I’m now the keeper (yes I read fantasy) of 5 full binders of them and I occasionally pull them out to have a look through them for ideas or to reminisce.

I digress, I’m here to talk current publications and Knitting Magazine seems like as good a place as any to begin with.  Knitting, is one of my favourite publications, there’s a good mix of everything you want in a knitting magazine.  More recently, Knitting has had a bit of a refresh and the new look magazine is even better.  The patterns are laid out in sections now, so all the women’s garments are together, the men’s, children’s, accessories, etc.  There’s often a ‘How To’ based on an unusual technique and there’s also the usual yarn and book reviews that you see in many of the other publications too.  The magazine is very often pattern rich with an average number of 20 or so each month, but ‘bumper’ issues can have over 50 💕 One interesting thing to note – Knitting doesn’t have a web page as such to support the magazine.

Next up is Simply Knitting, which in truth is actually very similar to Knitting, but doesn’t appeal to me quite as much.  Perhaps it’s because the publishers, Immediate Media Ltd. produce another of my favourite mags – The Knitter.  Simply Knitting can quite often seem a little ‘light’.  It’s a personal thing I’m sure, there are still lots of lovely patterns, reviews and editorials, but I think it probably lost something when The Knitter came out.

The Knitter on the other hand is usually so inspiring, it is the only knitting magazine deliberately aimed toward 😉 The More Experienced Knitter 😉 Whilst not strictly true, the designs inside are more likely to contain lace or cable stitches, stranded or intarsia colour work, or be of a less than standard construction.  There is usually a master class, book/yarn reviews and everything else you’d expect form your knitting magazine.  As with most of the publications nowadays they can also be found on all sorts of digital platforms like Facebook and Ravelry too.  The actual magazine is quite different to the other knitting ones, it seems to be printed to a higher quality and this is probably reflected in the price of £5.99, I pay €9.16.  It is a little pricey, but for me there have only been the odd month where I wouldn’t consider making any of the designs within.  It’s usually quite the opposite if I’m honest, in the issue above (81) there are at least 5 patterns I could easily be persuaded into making and I’m in ♥ love ♥ with the extra free pattern for a Swedish Shawl by Donna Druchunas. 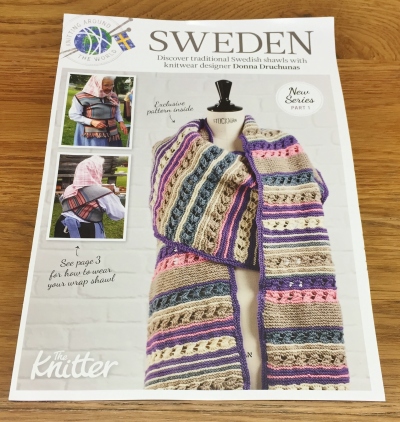 Whilst the colours aren’t me, I absolutely love the concept.  it’s the first in a new series from The Knitter, so I can’t wait for the next issue to see what it brings. 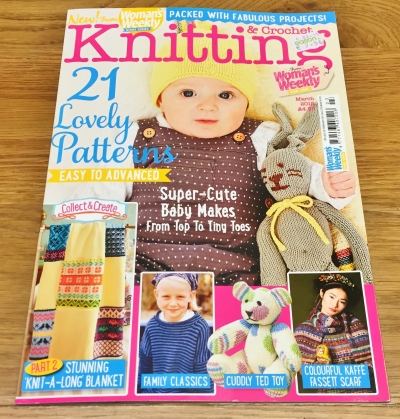 Knitting & Crochet from Woman’s Weekly Home Series has turned into a monthly magazine after Time Inc (UK) decided to increase the number of issues from 4 to 12 per year.  It is actually quite a good magazine and the one where you’re more likely to find licensed projects.  By that I mean jumpers with Peppa Pig on them, or toys like Paddington Bear or Bob the Builder.  Producing licensed patterns can be extremely expensive for companies now as there are all sorts of issues surrounding distribution rights, which is why you don’t see them so often now.  The Woman’s Weekly has been around for as long as I can remember and many knitters will have used a pattern that they found in it.

Knit Now from Practical Publishing International and edited by Kate Heppell is one of the newer magazines to join the family with the first issue dating back to 2011.  I can distinctly remember having a conversation with Dina when the magazine first came out, about how we wondered if it would continue to be new and innovative and in the main it has.  It has a much more independent feel to it, with far more designs worked in yarns from the smaller producers. The magazine is committed to supporting the British yarn industry and they promote British yarns, even dedicating one whole issue every year to them.  An important feature of the magazine is that the garments include sizes up to a 26.

It just so happens that the latest issue was the British yarn Industry issue and it contained an exclusive pattern book of 25 baby knits with it.  Lots of little babas bedecked in knitting to coo over, oops I mean lots of knitting ☺️ 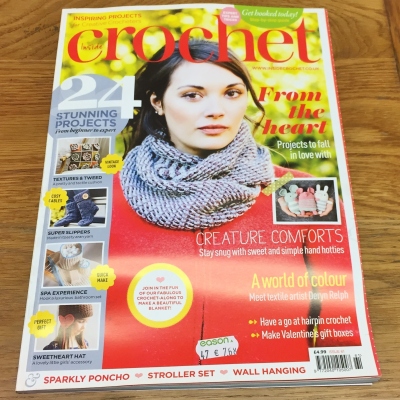 Inside Crochet is one of two newish monthly crochet publications to hit the shelves, the other is Simply Crochet.  As the names suggest they are dedicated crochet magazines, which cover all aspects of the craft so don’t be surprised to see projects using hairpin, broomstick or Tunisian crochet too.  There are usually somewhere in the region of 20 projects in either mag, for anything from cardigans to dishcloths.

Like it’s competitor Inside crochet is a bright, cheerful publication aimed at making crochet fun and accessible.  There are much fewer single patterns designed by the big yarn houses like Sirdar and King Cole available, so both of these publications go some way towards dragging crochet into the 21st century.  Credit where credit is due though, the big boys have been trying to develop more designs of late, probably in order to grab you pennies.

Both magazines have web pages but, Simply Crochet has an app too, The Granny Square app is an added bonus and it’s free on the apple operating system so anyone can use it.  Android users can access the patterns by signing up for the monthly newsletters here.

For me, as a knitter in the main, I find there’s little between both magazines.  I love to look at the pretty pictures and read about what’s new in the crochet world and have to confess to being inspired by the rainbow granny squares on more than one occasion too.  Both Simply Crochet and Inside Crochet cost £4.99/€7.49 each making it even harder to separate the two.

You’d be forgiven for thinking that as I’ve covered 12 different magazines so far that, that must be it, except it’s not.  There are magazines from America that have traditionally been quite difficult to purchase here, but are much more readily available now and then there are the ones that I subscribe to too.