Autumn/Winter in the shop tends to mean we’re much busier, which is great, and after all sales are what we need and I’m grateful for every time the till drawer closes, especially with the amount of stock we carry.  I just have one tiny, ickle grumble, it’s not a big one but ……..

It’s really rather tragic, projects that would take me no time seem to be taking forever, and to add insult to injury, my list of unfinished items is ever increasing, as is my ‘to-do list’.

At present I’m over halfway through making a lightweight poncho/top; I have a Christmas elf body and hat completed but features, etc. still to complete.  There’s at least one all-but-finished scarf for the shop but I made it in a discontinued shade, so I need to knit it again in a current shade before displaying it (it will also help as a test knit before writing up the pattern).  Then there’s the list of knitting I’m supposed to have started – yes I did say started, for Christmas presents.  I do have two scarfs underway, both of which are quite a long way off being finished.

On the plus side I did take back the neck on the poncho I’d been making in Celtic Chunky from Wendy after having made it as per the pattern instructions.  I picked up 20 less stitches than suggested and used a 6.5mm needle instead of the 7mm.

Dina looks beautiful in it and says it’s so warm it’s like wearing a blanket, and she’s always cold.  It has dropped a little around the neck despite my alterations, so was I to make it again I’d actually cast off less stitches at the neck too, which would hopefully rectify this.

A second batch of Autumn/Winter goodies has arrived in.

Some of you have probably already seen the post I put on the Facebook page about the new scarf yarn from Wendy – Nina.

I’m a little smitten with it myself and have been seen on several occasions sporting one of the scarves.

There were new shades in some of our favourites, of course I only remembered to photograph one – this was after the photo at the top of this post.

A lovely new sock yarn or 4ply depending on what you prefer – Wendy Roam Fusion.  It’s available in 5 lovely shades, at least 3 of which have been subliminally singing my name since they arrived. 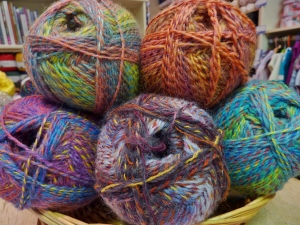 I’m hoping to knit this up if I can find the time? 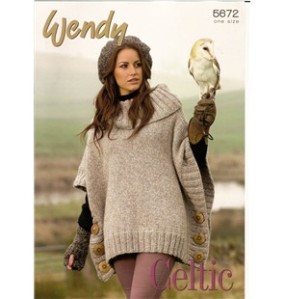 Hopefully, they’ll be a lovely delivery of Merino DK and Alpaca Silk Aran today or tomorrow.  I’ll take pics and post them up for you all to see.