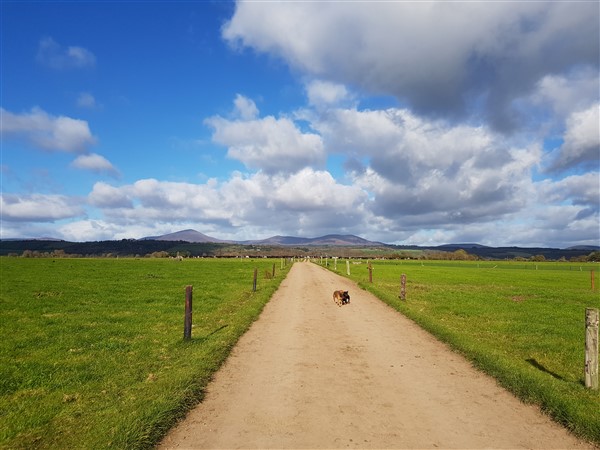 It’s a question because I’m not too sure you can ever have too many baby hats, especially when said baby is due on January the 1st.

Having said that, my grandson, when he gets here, will also need cardigans and I’m not sure buying them is on when he’s gonna have a nana that knits?

It’s only excusable to a point, right?

I think I mentioned in my last post, that it feels like I’ve been sat in front of my computer forever and was in need of that hit of satisfaction you get from completing an FO?  (Although, I could have said that on the podcast episode I recorded for Olann and?  Go me for sticking to my schedule, sort of.)

A hat would fit the bill nicely and even though I love a good hat personally, the grandson gets first dibs for the foreseeable future at least.  So, despite having far too many knitting patterns and books to mention, I thought it would be quicker to have a look on Ravelry and see if anything caught my fancy. 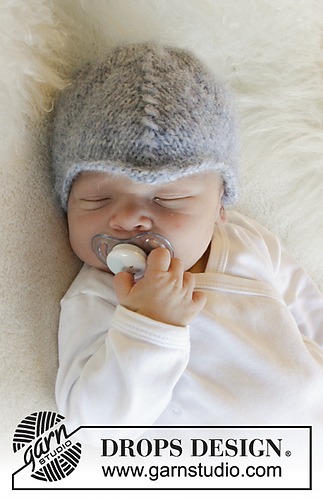 This little beauty practically jumped out of the screen at me.  Isn’t it just the cutest thing you’ve ever seen?

Obviously, it was the baby that caught my eye initially, I mean come on, even my womb did an involuntary squeeze and I’ve been a mother for 28 years now.

Having printed off the pattern, with a view to trying it out with a soft merino, I realised I actually owned a ball of the recommended yarn, Drops Air.  Only problem being it’s pink and you know that just means anyone who sees the baby wearing it will assume he’s a girl. 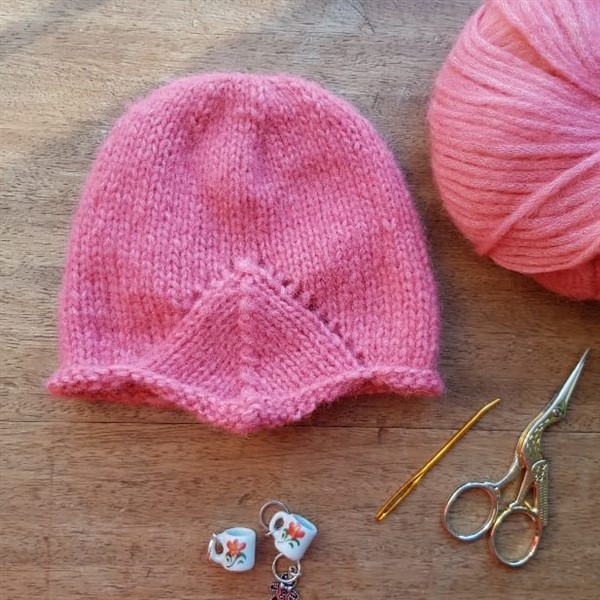 Having said that, baby Daisy hadn’t long been born, so I made the first one for her.  (you might have already seen this on Instagram, sorry)

I gifted the hat to mum Deirdre when I visited her and Daisy – my but she’s a little dote.  It doesn’t really match with the Baby Vertebrae I’d already knitted, but I don’t think that matters too much, they don’t have to be worn together after all? 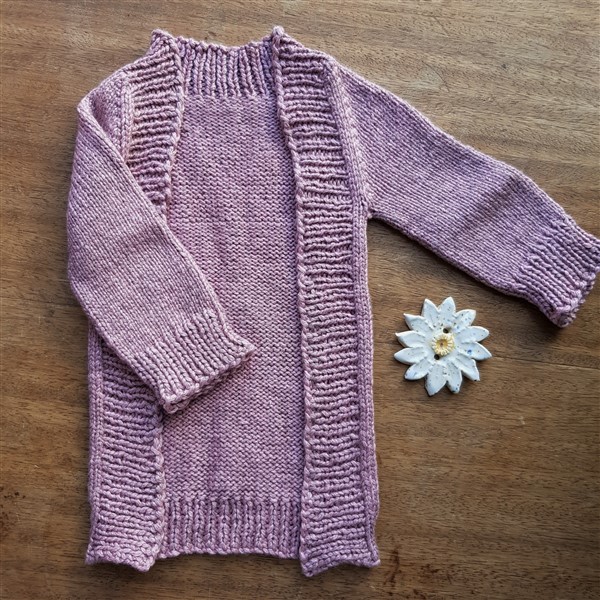 I knitted this in Rowan Softyak DK which is a blend of 76% Cotton, 15% Yak and 9% Nylon.  Knitting with it was much nicer than 100% cotton and I love the tonal effect of the yarn, which makes it look ‘vintage’.  The cardi took less than 100g and is one of my favourites to knit, although it really doesn’t photograph well unless filled with a baba.

The hat completely won me over and so has the Drops Air.  So much so, that I added 3 balls of it to an order I was already placing for something else yarny related.  It’s a blend of 65% Alpaca, 28% Polyamide, 7% Wool and is a ‘blow yarn’.  Apparently, that’s when the fibres are blown into a tube together, which results in a yarn that is 30 -35% lighter than that of a traditionally spun yarn of the same gauge. 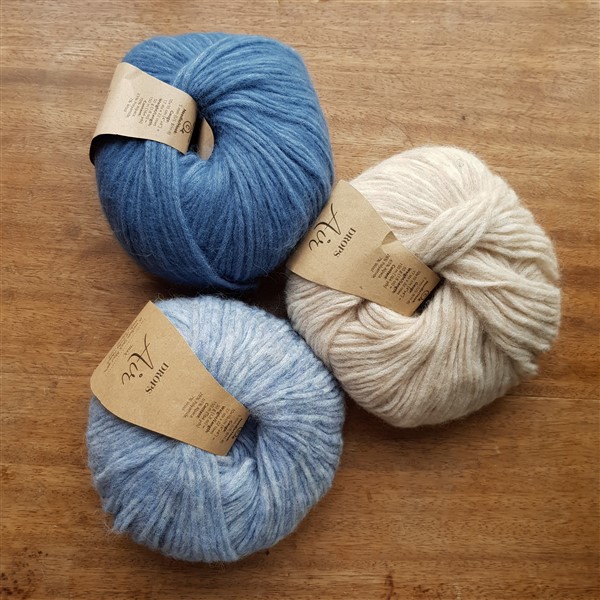 I thought I’d ordered denim, creamy beige and light grey, but it turns out it’s a pale blue.  To be honest, I felt like ordering one of each shade, but as I’m hoping to call up to the Knitting & Stitching Show in Dublin in a couple of weeks, I can always pick up some different shades then.  I’m already picturing a stripey cardi for the baby or a pair of mittens for me or my daughter to keep her hands warm while she’s pushing the pram.  (On a side note, have you seen how expensive prams are now?  Totally ridiculous, it’s a pram, not a car.) 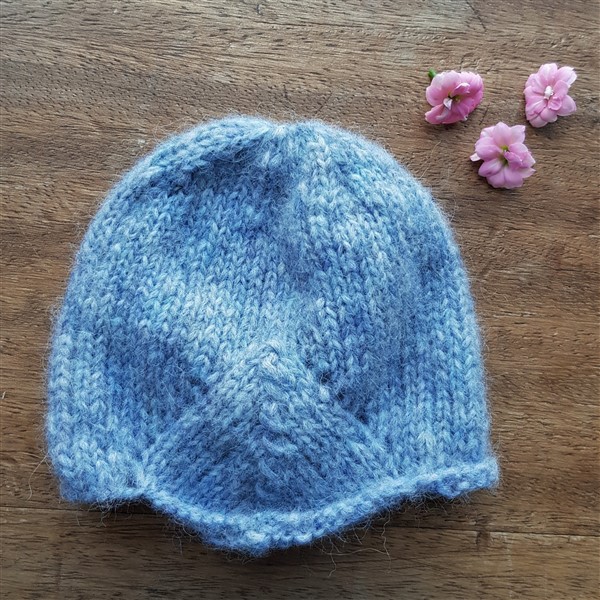 I’ve already knitted a Milian up in the light blue and can’t wait to cast on one of the other colours.  In other knitting news, Conifer has one sleeve finished, I knitted it twice because I forgot to do a decrease somewhere and just couldn’t live with it.  Well, actually, it was more a case of not being able to see it, in order to replicate it on the other side.  I’ve also nearly finished knitting another little baby cardi that I’d cast on a couple of weeks ago.  Hopefully, that one will be off the needles and sewn up before the weekend is out. 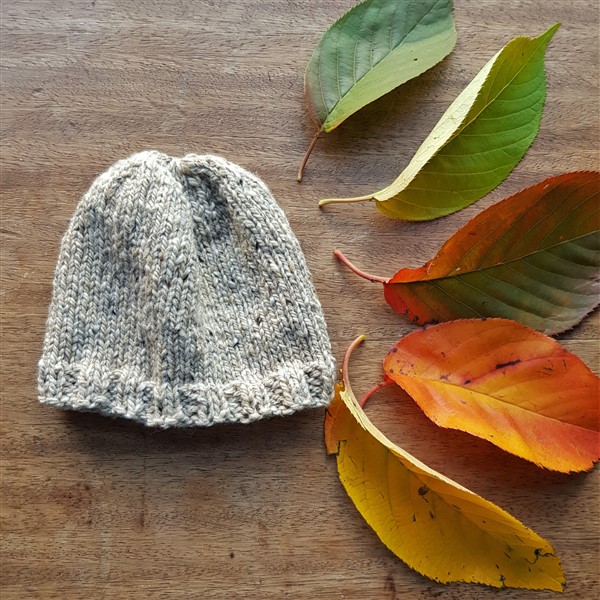 I also cast on and completed another little hat whilst I was at the cinema the other night.  If I’m going to be 100% honest here, I cast it on and knitted the first row of rib before I went in.  The rest was completed whilst I watched the remake of A Star is Born.  Fortunately, I’d finished it just in time to grab the tissues for when the movie gets sad.  If not it could have ended up being dragged through the popcorn confetti all over the floor as I left the cinema blurry eyed, with mascara running down my cheeks.

Totally random point and slightly off topic – I couldn’t believe how many people left their rubbish behind in the cinema.  I just don’t get it, the bin is at the bottom of the stairs and everyone has to walk past it.  It’s just plain rude!

No prizes for guessing that the hat is knitted using Studio Donegal Soft Donegal, in shade 5208 Oatmeal.  I thought it would coordinate perfectly with a little cardi that I’m hoping to make in Studio Donegal’s new yarn Darnie.  I’ve promised myself that I’m not going to cast it on until I’ve cast one off.

I think that’s everything for now at least, except to say it’s been another beautiful week here in Ireland, mild for October during the day, but there is definitely a nip in the air come sundown.  It’s hard to believe that the clocks will be going back tonight, especially when my bedding plants are all still in bloom.,