We’ve been so lucky with the weather here in Ireland, it’s been much hotter and sunnier than you’d usually expect it to be at this time of year.

Yay! For the sun

Boo! For the pollen.

I think I must have had a rant here about it every year since I first started blogging, so I won’t bore you again, except to say that it can make even the happiest of people just a tad miserable.  My eyes are so itchy, I’d willingly dig them out with a spoon and the tightness in my chest means I can do the best Darth Vader impression ever.

Do you know it’s not actually possible to put your fingers down your ear canal and scratch the back of your throat, no matter how much you’d like to?

If that wasn’t bad enough, there’s the whole sneezing and having to stand very still, with every muscle tensed that you can possibly manage.  It was the third, I swear, I blame Kye – I’m ruined!!!

No sane person locks themselves away in a room when the sun is so high in the sky and I’m about as far from sane as you can get, so I tend to make things worse.  Dog walks, gardening and decorating, who thought that would be a good idea?  Hands up, I was away in Brighton for a good part of it, but I did get involved with the paint stripping and indulged in some chalk painting.

One of my good friends gave us a set of pine wardrobes and whilst I love wood in all it’s guises, pine would probably be my least favourite.  Which is where the chalk paint comes in.

I’m not going to lie, I really did want to paint the wardrobes in a more turquoise/blue shade, but as much as I love the Annie Sloan paints my budget just wasn’t going to stretch that far. So my choice of colours was restricted to the range of Rust-Oleum Paints that you can get in B&Q. 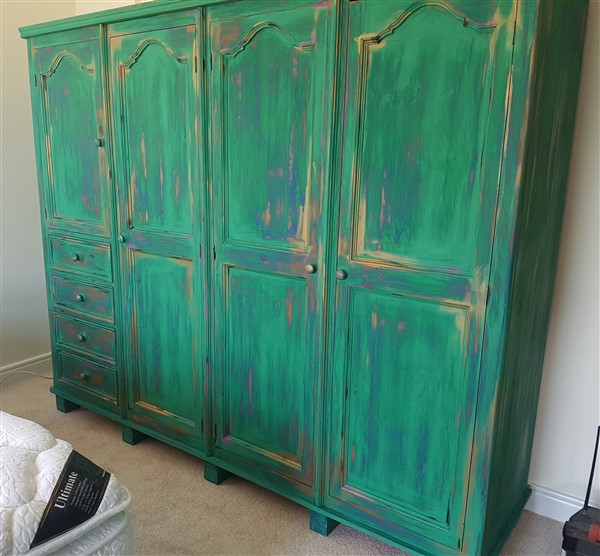 When I first suggested the green as a top coat, my husband, who like many other Irish people, tends to run a mile from all things Kelly Green, mumbled something about a dead body, but it was so quiet that I can’t be sure if he meant his or mine.

Anyway, after an initial light sanding, we applied a generous coat of Blue Silk followed by a coat of Emerald.  Once this was dry, I went at it with some sandpaper and then raided my stash of acrylic paints for gold, cerise and black, which I applied in places to make it look like it had had loads of colours on it previously.

Something so lairy wouldn’t be to everyone’s taste I know, but it fit’s in nicely with the Indian/Morrocan theme for the room that I have in my head.  All the walls bar one are a neutral ivory, with bright turquoise on the feature wall.  The carpet is neutral as is the bedding, but we’re going to go all out in the rest of the room with over the top rugs, cushions and curtains, some of which I’ll make.  It’s very much a work in progress though and it’ll happen as and when funds and or time permits.

One thing that did make my friends chuckle was the story of my bed.

You see, the wall where the wardrobes now sit, is actually the only wall in my bedroom that doesn’t have a window or a fireplace on it.  Prior to being given the wardrobes, my bed, which had been made by my husband, lived next to it and although it had a headboard it wasn’t very high, so if I sat up in bed knitting, my pillows rested next to the wall.

The bed didn’t start out like that.  Initially, the headboard was much higher, but I seem to have a problem with sleeping high up off the floor.  Don’t ask me why I think it might have something to do with living on a narrowboat and my bed being the top bunk.  Whatever the reason, it seems to be a problem and having deliberated with my husband that this could be one of the possible reasons I was having trouble sleeping, we agreed that he would disassemble our bed frame and we’d see if I was any better with the mattress on the floor.  If that was the case, he’d then alter the bed.

However, he went upstairs and it soon became very apparent by the sounds of sawing, that he wasn’t taking the frame down as we had discussed.  Instead he’d pretty much cut the legs of my bed off and as a result, the headboard had become something more akin to a shelf.

This was a couple of years ago now and when we were moving the room about, I happened to ask if he could cut me a piece of board that I could stand between the mattress and the bed frame if I wanted to knit in bed?  A very innocent request wouldn’t you agree? Just a piece of wood, nothing more than that, something I could lean my pillows or a couple of cushions against……

I came back from visiting my daughter in Brighton, to discover that most of my bed frame had gone out of the window and a request from the cabinet maker to start scanning Pinterest for ideas.

After showing him a couple of pictures, he came up with this.  Isn’t it lovely?  It probably only took him about two days and that includes staining and varnishing it.  It’s rustic because it’s made out of floor joists, which is what I wanted and knowing how much I’d prefer not to have anything in front of the window, he left it so light can still stream through.

There’s just one problem though and I bet you know what I’m going to say?????

I’m seriously thinking of getting one of those bed guards you put on a toddlers bed.  Either that or insisting that my ever suffering hubby puts a drop down side on my side, so it’s effectively a giant cot. 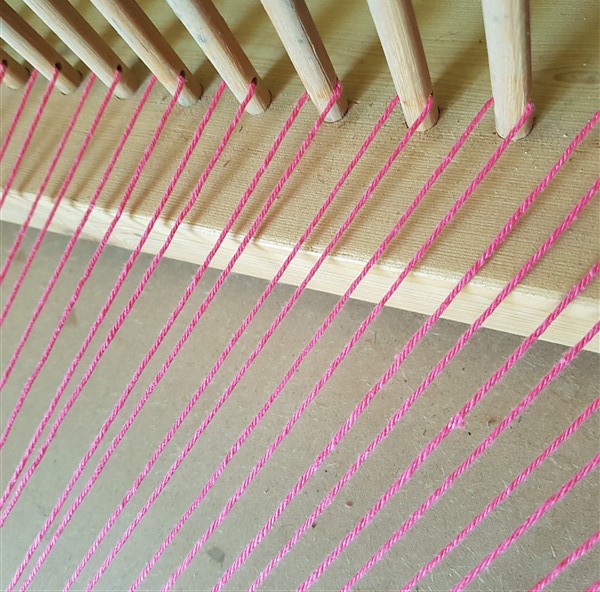 What little making there has been, has in the main, been for Olann and well that and the days knitting for the Knitted Diary.   I did start to weave a rug on my pegloom, but I wasn’t happy with it, so I took it all back (look how empty it is now.  I was using super chunky yarn from my stash, but it still felt too light and I’m wondering if plying several strands together would give it the extra oomph that I’m after?  Neither of my spinning wheels would be up to the task so I may have to improvise or see if I can track down a secondhand Ashford Country Spinning Wheel which my family might all agree to buy me for my birthday.  Other than that I might try and improvise something just to try it out first, which might well be the safer option.

Following on from the Eco Printed Scarf I showed in my last post the Handweavers Guild of Cork’s annual dyeing day took place on Saturday, led by moi.  There was a bit of arranging involved in it and my car was so packed with equipment and foliage that I barely had space for the scarves that had been mordanting the day before. 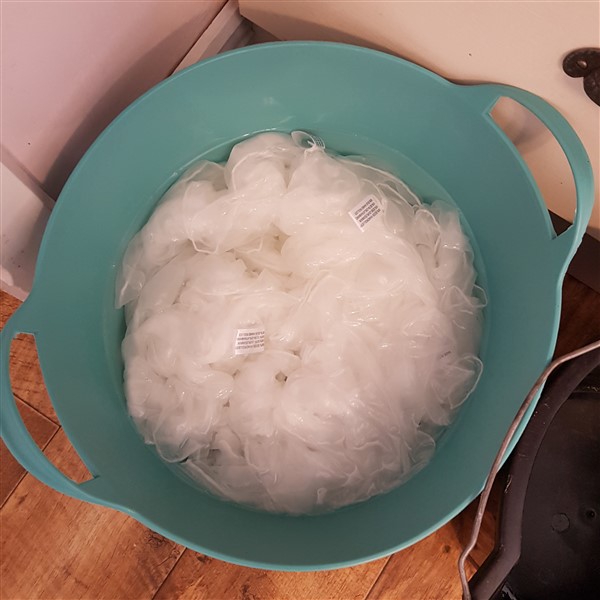 I decided to take them out of the water, rather than risk going for a swim as I swerved around one of the country roads.

Fingers crossed everyone enjoyed the day and I’m hoping that when they open their bundles at home, the results are amazing.  We’ve all agreed to take our scarves along to our July meeting for a ‘big reveal’, which means having to wait a little longer to see how they turned out.  That’s the scarf bundles in the photo at the top of this post.

I can reveal, that I’m very happy with how mine looks at the moment, there’s reds, oranges, golds and greens on mine, which I hope will still be there once I give it a gentle wash. 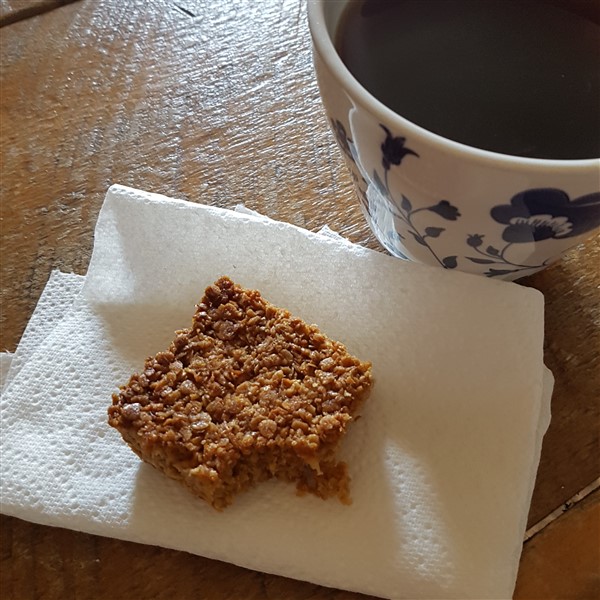 The greetings cards were just a little project I came up with for us all to make while the scarves were steaming because there are only so many flapjacks you can eat in one sitting.