I’ve spent the last few days trying to gather up everything we’ve collected in for the The Kyl Assylum in Belarus.  As you can imagine my office tends to resemble a very untidy wool shop at the best of times but there are times when the whole thing just gets out of hand.  Lately the problem has worsened as the sample balls of wool fight with my stash, the paperwork and the ever increasing number of carrier bags containing donations.  As if that wasn’t enough, my son shares the office so I can keep a watchful eye on his computer use and ‘spend some time’ with him whilst he battles aliens on his XBox 360.

It was lovely to go through everything again, some of the items are so beautiful.  In total there were 30 Scarves and 24 hats to send to Kyl  via the Bureen Chernobyl Project.  In addition to the hats and scarves we also received a couple of boxes of toilitries to pass on and we had a good rummage and found a good few jumpers too. 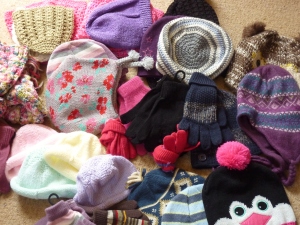 Some of the donations that came in have been more suitable for children so I have separated these out and will be forwarding them on to The Children’s Chernobyl Trust for them to pass on to needy boys and girls.  In addition to the 31 hats and 13 pairs of gloves we’ve had 13 baby and toddler cardigans donated too to pass on.

Thoroughly, embracing the tidying up bug I also managed to go through the XBox king’s old clothes and sorted out everything that he’s grown out of to send off with The Children’s Chernobyl Trust items. 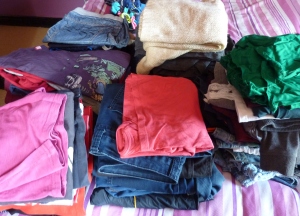 Happily there’s now space to house all the knitted squares were hoping for.